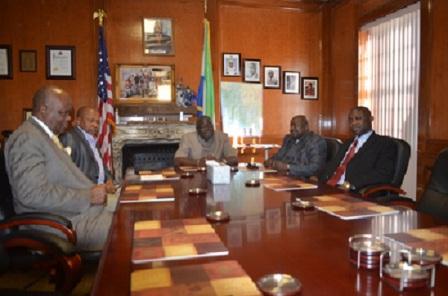 Speaking during a brief meeting, the two senior government officials were very categorical in stating that they were on vacation.

“But that not – withstanding, as a citizen of my Country and a senior government official, it is my duty to make my presence known to the embassy. Said Brigadier John E. Milton. Adding, “I am bound to not only visit the embassy, but to also pay my respect to Ambassador Stevens and  deputy Chief of Mission Ambassador I.S. Conteh and staff: and to also thank all of you for your hard work.” Said Brigadier John E. Milton.

The deputy Chief of Defense Staff used the occasion to allay any fear of security threat, and said modalities and strategies are in place to not only avert any situation, but also to take care of any unforeseen circumstances.

He appreciated the reception of his visit to the embassy and said, whenever he is in the United States, he will pay courtesy.

Hon. Ali Badara Mansaray described his visit to the embassy as the first and appreciated the Ambassadors to accommodate him amidst their busy schedule.

The Hon.Deputy Minister for Trade and Industry was returning from Miami Florida, where he not only signed membership agreements with the Africa Trade Development Center (ATDC) during AfrICANDO 2013; making Sierra Leone the first African country to become a member of the ATDC, but also showcased the talents, investment and trade opportunities of the west African Nation.

Briefing the Ambassadors and Embassy staff, Hon. Ali Badara Mansaray said he reiterated President Ernest Bai Koroma’s government commitment to increase Sierra Leone’s exports to the United States under AGOA, and said he called upon United States companies to invest in, and do business in Sierra Leone.

The Hon. Deputy Minister said he reiterated the call for the establishment
of direct flights and sea routes between Miami, and Freetown in facilitating closer trade, investment and cultural ties between Sierra Leone and the United States.

Hon. Ali Badara Mansaray also updated the Ambassadors on the revised trade laws and investment opportunities in the Country. He also spoke of regional trade and cross border trade.

Responding, Ambassador Bockari Stevens thanked the two fine gentlemen for calling on the embassy and welcomed both of them.

He assured them that the embassy is always open to them as it is their country.

According to Deputy Chief of Mission Ambassador I. S. Conteh, “the Embassy is your place”.

Earlier, Head of Chancery Mrs. Isatu Sillah gave a brief synopsis regarding the activities of the embassy and countries under its coverage,

The two senior government officials were taken on a conducted tour of the embassy by financial attaché Paul M. Kamara.