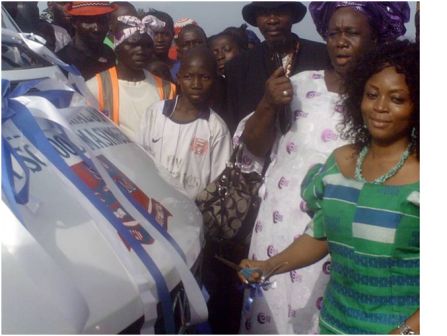 There was a great jubilation at Masingbi Town in the Konike Chiefdom, Tonkolili District over the weekend as bondo drummers and bubu dance took the centre stage to give a red-carpet welcome to the Honourable Member of Parliament for Constituency 65, Hon. Mabinty Fornah. (Photo: Hon. Mabinty Fornah and the new school bus)

Being the daughter of the late prominent son of the soil, Mr. Samuel Fornah, the development oriented Member of Parliament has thought it wise to take the lead in following the footsteps of his late father, who served as a philanthropist and leader in his chiefdom.

As the first ever female Member of Parliament representing Constituency 65, Hon. Fornah was described by her constituents as a great liberator that is serializing development programmes for all categories of people. The construction of the Sam-Fornah Memorial Junior Secondary School at Mamanso Sanka Village was seen as a major step that boosts children’s education. Quite recently, she also took the bull by it horn to construct a community centre and Sam-Fornah Memorial Junior Secondary School for Girls at Masingbi Town. This was followed the commissioning of a brand new school bus over the weekend (Saturday 19th October 2013).

The Honourable Member of Parliament told this press that Politics is all about change, which she wants to bring to the lives of young girls. “I went through challenges as a young girl and so I want to help young girls reach my level and even go to a higher height in the near future,” she said, and further notes that the girl child education is very important.  “Girls are vulnerable to so many things in society and so they need such opportunities,” Hon. Fornah said, adding that parents must focus on their girl children and must see them as their fixed assets.

The MP started her School project in 2007 at Mamaso Sanka Village, and has been instrumental in supporting since aged 18.  “I am not doing this because of politics but as a Born Again Christian I have compassion on the suffering masses,” she said. The Honourable Member of parliament is a proud winner of the YACAN’s Teacher’s Excellent Award, where she received an Award as a Girl Child Ambassador. She called for support from government and other organizations so as to achieve her goal.

Hon. Mabinty Fornah pride herself as an example of girl child education in Konike Chiefdom.  “If you invest in the girl child she will be like me and God will help them to grow the more”.  Teenage pregnancy, she said is a problem in her chiefdom.  She advised that men going after girls should think of their own children, and noted that hygiene is very important, especially when children are young.

“Politics is over and its time for development.  The school is not for APC but for everybody.  It was not constructed to make profit,” says the APC MP, noting further that the school started with free education with over 200 children.  “With all the problems the school had gone through especially the collapse of roof on several times, I will not relent in supporting the girl child education.  It is not part of our job to construct schools, hospitals etc, but to make laws and advocate for their constituencies. Such projects are done as interest but it is not obligatory,” she said.

Hon. Fornah is been supported by friends and family members to undertake such development projects, and reiterated the need to invest in the girls as they are fixed assets in society.

Hon. Patricia Browne of Kambia District who delivered the keynote address, said one of their problems in the north was none education for the girl child.  The cited the south and east, which were very much pushful towards that direction.  “If we have the likes of Hon. Fornah in all Districts, the entire community will develop,” she said.  Parliament, she added is trying to enact the Gender Equality Bill, which has policies that benefits all in the country, and reiterated that gender is not only about women.  “We are asking of 30% of representation.  This can be achieved when women are educated,” says Hon. Browne, and called on Konike people to join in women’s development.

Commentary press release from the...

Save the Children International save liv...