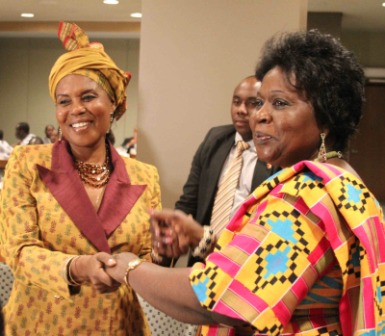 “This covenant acclamation has been previously awarded to Mrs. Winni Mandela for her efforts in South Africa and the impact she rightfully exhorts worldwide”, said Victor Mooney founder and executive director of New York based South African Arts International, Ltd.

“The First Lady of Equatorial Guinea is the epitome of perfection”, Mr. Mooney added.

Mrs. Constancia Mangue Nsue de Obiang, wife of President Obiang Nguema Mbasogo, social activities have made her a fundamental figure for the evolution of women and girls of Equatorial Guinea. The First Lady was recently presented with the Millennium Development Goals 2013 Women’s Progress award in New York recently.

She was born in 1952 in the town of Angong, near Mongomo, and studied in the school run by nuns in Bata. In 1985 she created the Equatorial Guinean Child Aid Committee (Canige), a non-governmental, apolitical and non-profit institution of which she is Honorary Chairwoman and through which she has carried out innumerable social works. For years she has personally been in charge of seeing that many children with especially complicated clinical cases receive medical attention even outside the country. The Canige also dedicates special attention to the fight against juvenile delinquency and has promoted the creation of the teaching centers of María Jesús Oyarregui (in memory of the mother superior of the St. Theresa’s convent where the First Lady studied), and the Nana Mangue of Malabo.

The First Lady of Equatorial Guinea also belongs to the National Committee of the Fight against AIDS, is honorary Vice Chairman of the Association for National Solidarity for the Disabled (Assonam) and holds similar positions in different social associations of Africa, such as Mission for Peace of the First Ladies of Central Africa. She has participated in numerous international meetings on women’s rights and the fight to improve with rights of the most vulnerable layers of society and was elected Doctor Honoris Causa by the Inter-American University of Humanistic Sciences of Buenos Aires. Mrs. Obiang is a graduate of the Martin Luther King University School of Teacher Training.

The Republic of Equatorial Guinea (República de Guinea Ecuatorial) is the only Spanish-speaking country in Africa, and one of the smallest nations on the continent. In the late-1990s, American companies helped discover the country’s oil and natural gas resources, which only within the last five years began contributing to the global energy supply. Equatorial Guinea is now working to serve as a pillar of stability and security in its region of West Central Africa. For more visit www.spiritofmalabo.com