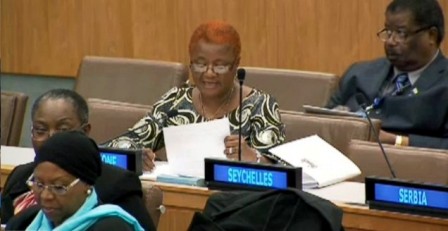 The UN Social, Humanitarian & Cultural Affairs Committee also known as the Third Committee concluded on Wednesday its general discussion on human rights issues, the advancement of women and implementation of the outcome of the Fourth World Conference on Women and of the twenty-third special session of the General Assembly.  (Photo: Dr. Ebun Jusu  Sierra Leone Deputy Minister of Foreign Affairs & International Cooperation delivering her statement on the Advancement of Women)

Member States representatives renewed their calls for more women to participate in the political life and for the amendment of national criminal codes to address domestic violence and the related crime of “femicide.”

At an earlier meeting last Friday, representatives and delegates from 37 member states including Sierra Leone Deputy Minister of Foreign Affairs and International Cooperation Dr. Ebun Jusu unanimously called for the elimination of persistent discrimination and violence against women and girls.  They also urged the committee for gender and equality to be a stand-alone target in the post 2015 Millennium Development Goals (MDGs) agenda.

The high panel meeting which coincided with the International Day of the Girl Child began its consideration of the advancement of women and review reports of the Secretary-General on “The improvement of women in rural areas on socioeconomic The status of the Convention on the Elimination of All Forms of Discrimination against Women.”

It also examined barriers to women education, violence against women migrant workers” as well as the improvement of the situation of women in rural areas,” among other issues.

“We have one goal that is to realize the promise of the United Nations Charter and to realize the promise of equal rights for men and women.  More parents want the same opportunities for their sons and daughters, and more people say enough is enough on violence against women and girls,” Phumzile Mlambo-Ngcuka, Under-Secretary-General and new Executive Director of the United Nations Entity on Gender Equality and the Empowerment of Women, or UN-Women told UN Social, Humanitarian Cultural Affairs Third Committee Meeting on the Advancement of Women

Ms Mlambo Ngcuka in her opening statement acknowledged the report on violence against women migrant workers focused not only on human rights violations against girls by recruitment officers and human traffickers, but also by law enforcement officers.

She said, as the International Day of Rural Women observed on Tuesday, October 15 there could be no doubt that rural women played a key role in food production and in ensuring family well-being, but that obstacles remained to their full participation in socioeconomic life.  She called for strong legal reforms to allow women, especially widows, to own the land on which they worked, and for reduced unpaid work on the part of rural women.

Ms Mlambo Ngcuka pointed out as for women political participation they comprised a mere 17 per cent of Ministers around the world, and that only eight Heads of State were women.  During the recent general debate, only 14 women had been addressed the in the General Assembly, she pointed out.  She reminded the Committee that despite programs already in place, many obstacles remained to women’s participation in political life, including lack of support by political parties.  There was a need to invest in educational tools to support women’s aspirations to enter political life.

Citing President Ernest Koroma’s “Agenda for Prosperity” which she described as Sierra Leone’s roadmap to post-2015 development, deputy foreign affairs minister Dr. Jusu noted the government of Sierra Leone has committed itself to gender equality and Women’s Empowerment by signing a range of policy declarations and enacting legislations.

Dr. Jusu highlighted the National Gender Strategy Plan which she called a “Government’s flagship development program to mainstream gender in all government policies so as to achieve gender equality in legislation, participation, representation, empowerment and the distribution of resources.   She reaffirmed the plan’s aim to serve as a tool for effective gender program delivery in Sierra Leone in tracking joint government-donor policies and budgets on gender related programs.

Women in Sierra Leone have made some meaningful gains in political participation.  The Chief Justice and head of the Judiciary is a woman. Currently, there are eight ministers and deputy ministers in President Koroma’s cabinet and the appointment of a woman as a special executive assistant with supreme executive authority among others.

Despite the improvement of legal protection that women enjoy in regards to matters relating to marriage, divorce, and inheritance, the Committee on the Elimination of Discrimination against Women (CEDAW) Consideration of Reports submitted by States Parties under Article 18 indicates women in Sierra Leone have very few ownership rights. CEDAW report further stated that women constitute the largest group of agricultural laborers, but they have never had full access to land governed by customary rules.