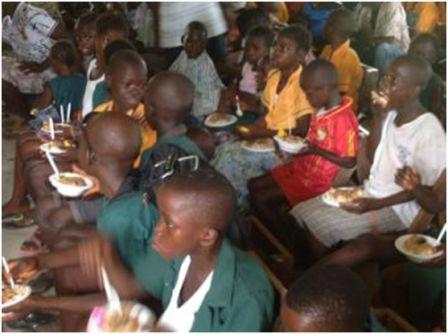 In celebrating its first Thanksgiving ceremony since it was opened some years back, parents, teachers and pupils of the DEC Marampa Primary and Junior Secondary Schools received blessings from the Emauni Foundations, headed by Mrs. Ashmawo Bangurah President/Founder and was supported by Mr. Ricky Taing, Nurse Practitioner (NP) at the Kings County Hospital in Brooklyn New York, USA

The blessing which was in the form of providing food for the above primary and secondary schools, and more than two hundred people in Marampa and its environs, attracted several dignitaries, which includes Religious heads, Councillors and Chiefs among others from within and afar of the Marampa Community.

Speaking at the ceremony, the Emauni Foundation representative, Ms. Memunatu King Kanu announced that the feeding event is just one of several activities the Foundation has taking to the Marampa community, Ms. Kanu further said that the event will serve as a milestone in the lives of those present “As thanksgiving service will not be effective in an empty stomach”.

She disclosed Emauni Foundation and its sponsors contributions to the village, which among others are building a Mosque, a Church as well as distributions of stationaries, used clothing, etc, etc. She expressed her sincere thanks and appreciation to Mrs. Ashmawo Bangurah president of the foundation, and donor Mr. Ricky Taing, who had been coordinating these activities from the United States of America.

Responding on behalf of the community, the Councillor for Ward 173, CPL Kabia expressed his gratitude and appreciation to the President/Founder Mrs. Ashmawo Bangurah, and Donors. Mr. Kabia expressed hopes that this will be an annual event that will gain momentum every year.

Marampa Youth Leader, Mohamed Kamara said the feeding was a step in the right direction and deserved a round of applause.

The event was climaxed by a script presentation by the pupils and a vote of thanks by Fatmata Kabia, a pupil of the school.

Boost to Girl-Child Education in S...