Graduation – the end and beginning of a journey 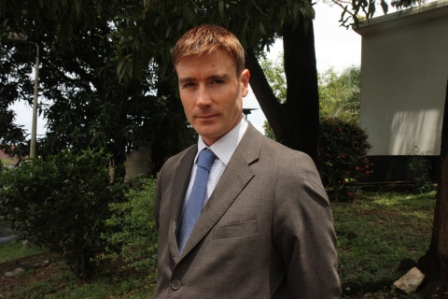 Graduation – the end and beginning of a journey

Three months into my role as Head of the International Security Advisory Team, Sierra Leone, I was asked to present certificates to three sets of military and police students. The largest course was the Junior Staff Course of the Horton Academy, the UK-led military staff college, comprising 40 Republic of Sierra Leone Armed Forces (RSLAF), Liberian Armed Forces and Gambian Armed Forces. I congratulated them on their achievement over 16 intense weeks and warned them of the courage and humility they would need as leaders, noting that their learning as future security sector leaders would begin, not end, as they left the Academy.  (Photo: Brian Jones, Head, International Security and Advisory Team (ISAT), Sierra Leone)

The second, smaller, ceremony saw two groups of students – military and police – completing Royal Military Academy Sandhurst training courses in the Psychology of Leadership and in Counter-Insurgency. Those on the latter course would be heading out to Somalia as part of Sierra Leone’s ‘LEOBATT’ contribution to the African Union peace-keeping mission (AMISOM), where they would directly apply their learning to active peacekeeping.

When I took over as the Head of ISAT, I realised that I would have to both learn a new role and adapt the organisation to its new role here. I am lucky to have retained experienced military elements to my team who happily accept my delegation of tasks more appropriate to those dressed in greens rather than a suit. We also have new uniforms on the team – those of our Police Advisors. ISAT has been asked by the Government of Sierra Leone primarily to work with the civilian security sector – particularly the police, whose role is ever more important as Sierra Leone’s needs change from conflict stability to economic stability and growth, as defined in President Koroma’s ‘Agenda for Prosperity’. Our task can neatly be defined as ‘Security for Prosperity’.

As these students graduate from high-calibre UK security training, Sierra Leone also graduates from being a recipient of UN peacekeepers, to sending its servicemen and women to fight for peace and security elsewhere in Africa. A fascinating time to be helping shape our bilateral partnership as Sierra Leone embarks on her new journey.