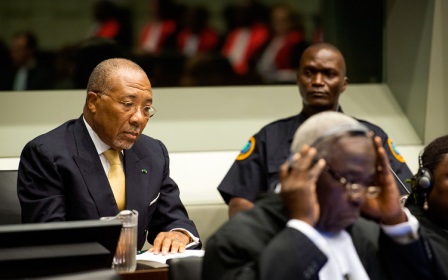 The Special Court Appeals Chamber today unanimously upheld the conviction of former Liberian President Charles Taylor on 11 counts of war crimes and crimes against humanity, and affirmed the 50-year sentence imposed by the Trial Chamber.

On 26 April 2012, the Trial Chamber found Mr. Taylor guilty of aiding and abetting crimes committed by RUF and AFRC rebel forces against Sierra Leones civilian population over a five-year period, and of planning, with RUF Battlefield Commander Sam Bockarie, crimes committed by rebel forces during the January 1999 attack on Freetown. The Defence and the Prosecution had each appealed both judgement and sentence.

The Appeals Chamber, consisting of Justice George Gelaga King (presiding), Justice Emmanuel Ayoola, Justice Renate Winter, Justice Jon Kamanda, Justice Shireen Avis Fisher and Alternate Judge Justice Philip Waki, found that the Trial Chamber had properly applied the standard of proof of beyond a reasonable doubt. The Judges also dismissed Defence challenges to findings of fact, saying that the findings were reasonable in light of the Trial Chamber’s careful and cautious approach to the evaluation of the evidence. The Judges said the Trial Chamber had relied on a combination of direct, circumstantial and hearsay evidence in reaching its findings, and that none of its findings were based on uncorroborated hearsay evidence.

The Trial Chamber also found that Mr. Taylor had supplied the rebels with arms and ammunition, military personnel, sustained operational support, encouragement and moral support, knowing that their strategy was to commit crimes against the civilian population. The Appeals Chamber concurred, saying that Mr. Taylor had a substantial effect on the rebels’ capacity to implement its operational strategy and to carry out attacks on civilians.

The Defence had argued that the Trial Chamber erred in finding the mens rea (intent) of aiding and abetting by applying a “knowledge” standard rather than a “purpose” standard. The Appeals Chamber rejected this argument, holding that under customary international law, knowingly participating in the commission of crimes establishes individual criminal responsibility. The Defence had also argued that the conviction was legally erroneous because Mr. Taylor had not assisted the individual soldiers who committed the crimes. The Appeals Chamber did not agree, finding that the crimes were committed in

furtherance of the RUF/AFRC operational strategy, and that the Trial Chamber had properly found that Mr. Taylor aided and abetted the planning, preparation and execution of that strategy and thus the crimes.

The Prosecution had argued that, based on the evidence before the Court, the Trial Chamber should have found that Mr. Taylor had ordered or instigated crimes committed by RUF and AFRC rebel forces. The Appeals Chamber found, however, that ordering and instigating were “inadequate characterisations of culpable acts and conduct” found by the Trial Chamber, and held that aiding and abetting “fully captures Taylor’s numerous ‘interventions’ over a sustained period of five years.” The Appeals Chamber agreed with the Prosecution, however, that the Trial Chamber erred in concluding that aiding and abetting liability generally warrants a lesser sentence. The Appeals Chamber held that a sentence must be based on the convicted person’s actual conduct and the totality of the gravity of that conduct.

The Appeals Chamber agreed with the Trial Chamber’s finding that Mr. Taylor had breached the trust of Sierra Leoneans and the international community when he had pledged publicly to work in the interest of peace while, in reality, abusing that trust by aiding and abetting widespread crimes against the Sierra Leonean population. The Appeals Chamber concluded that the 50-year sentence imposed on Mr. Taylor was fair and reasonable in light of the totality of the circumstances.

Justices Shireen Avis Fisher read out a concurring opinion on behalf of herself and Justice Renate Winter. She stated that “the confirmed findings overwhelmingly establish that Mr. Taylor, over a five year period, individually, and knowingly, and secretly, and substantially assisted the perpetration of horrific crimes against countless civilians in return for diamonds and power, while publicly pretending that he was working for peace.” Justice Fisher noted that eight independent judges had established Mr. Taylor’s guilt beyond a reasonable doubt, and stressed the importance of judicial independence. She stated that to suggest that judges do not act “independently ‘without fear or favour, affection or ill-will’…wrongfully casts a cloud on the integrity of judges in international criminal courts generally and the rule of law which we are sworn to uphold.”

The Appeals Chamber agreed with the Trial Chamber’s finding that Mr. Taylor had breached the trust of Sierra Leoneans and the international community when he had pledged publicly to work in the interest of peace while, in reality, abusing that trust by aiding and abetting widespread crimes against the Sierra Leonean population. The Appeals Chamber concluded that the 50-year sentence imposed on Mr. Taylor was fair and reasonable in light of the totality of the circumstances.

The Special Court is an independent tribunal established jointly by the United Nations and the Government of Sierra Leone. It is mandated to bring to justice those who bear the greatest responsibility for atrocities committed in Sierra Leone after 30 November 1996.