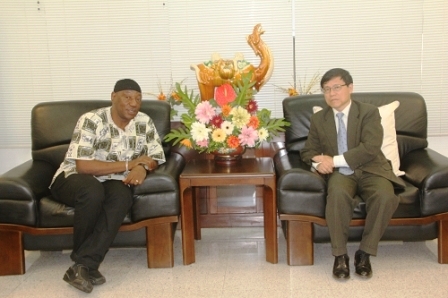 President of the Sierra Leone Association of Journalists (SLAJ), who also doubles Managing Editor of Awoko, Kelvin Lewis, on Thursday 12th September, arrived in Beijing, People’s Republic of China, on the invitation of People’s Daily newspaper. He is part of a 21 man team of media practitioners, who arrived to attend an African Media Workshop.

The SLAJ Chief will, on Monday 16th September, visit the International Department of the Central Committee of the Communist Party of China and China NGO Network for International Exchanges. He is also slated to visit Qiushi, the official magazine of the CPC Central Committee and the “most influential and authoritative magazine devoted to policy-making and theoretical studies”

On the 17th he will be attending a seminar the “China Dream and African Dream” .Talks will be delivered by experts and officials from China’s Ministries of Commerce and Foreign Affairs and scholars on African studies. On the same day, he will be departing for Xi’an city, IN Shaanxi Province, where he will be visiting the Shaanxi Daily Mail Group as well as paying visit to the Agricultural Training Base for developing nations in Xi’an Yanglin Agricultural Demonstration Zone.

Also as part of the program, Kelvin Lewis will be visiting Qin Shi Huang Terracotta Warriors and Horses Museum on the 19th and the Shaanxi History Museum in the 20th. He will then depart for Hefei, in Anhui Province where he will, amongst other be visiting the manufacturing plant of Midea, a consumer appliances and air conditioning systems manufacturer.

Welcoming the SLAJ President, Sierra Leone’s envoy to the People’s Republic of China, Victor Bockarie Foh commended the pivotal role the media is playing in the promotion of democracy and good governance in Sierra Leone.

During a brief discussion they both had, Ambassador Foh underscored, that the media in Sierra Leone has significantly contributed to the growth democracy, just as in other nations and it was therefore his pleasure to welcome the SLAJ President in China.

Ambassador Foh also paid tribute to the outstanding role that Chinese Ambassador to Sierra Leone, Kuang Weilin, is playing in the promotion of the Sino-Sierra Leone relations. He wished Kelvin Lewis happy stay throughout his visit, whilst assuring him that “the doors of the Sierra Leone Embassy are open to you and all Sierra Leoneans”

Media cooperation is one of several cornerstones China and Africa have been using in strengthening the Sino-Africa relations.

As part of the Fifth FOCAC Ministerial Conference Action Plan, during FOCAC Ministerial Conference in July 2012, leaders from China and Africa agreed to continue enhancing cooperation and exchanges in press and media as well as encouraged media organizations from both sides to set up objective and fair coverage of each other and intensify the communication of information on China-Africa relations and China-Africa Cooperation..

According to the said Beijing Action Plan for 2013-2015, a China-Africa Press Exchange Centre was to be established in China and the two sides also agreed to promote exchanges and mutual visits between Chinese and African journalists.

The latest by the SLAJ President will further help to strengthen the already existing ties between Sierra Leone and China, which commended over four decades ago.

Kelvin Lewis will depart for Sierra Leone on 24th September 2013.

The bond between New Haven and Fre...