What development can the Makeni City Council boast of 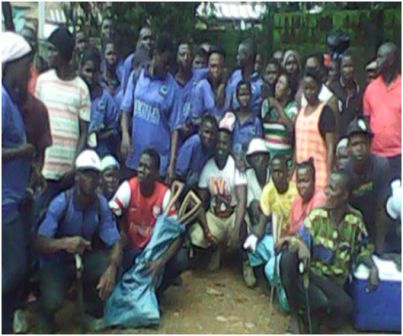 What development can the Makeni City Council boast of

when Lam-Tales is taking it all – residents vociferously pronounce

Carefully compare the contrast between the performance of an authoritative City and that of a sacrificial development individual, Abu Bakarr Kamara aka Lam-Tales, who spends his little resources and time to making development ends meet in his part of the country. In that light, unreserved and sparking questions from all quarters and classes of residents within and around the northern city of Makeni, unremittingly demand some urgent and accurate answers and explanations  from the current leadership of the Makeni City Council (MCC) in the north-east part of the country  with regards to the little  or more visible development  ventures and successes so far singularly achieved by  the current leadership of the  Mayoress of the city, Sunkarie Kabba Kamara.  (Photo: Lam-Tales at the bushy cemetery with a cross section of his crew)

Isatu Sillah in Makeni described Lam-Tales as a development sacrificial lamb whose Community ventures have overshadowed and overcome that of this present and past City Council administrations. Before this present Council administration, Lam-Tales  reconstructed a series of Community culverts, and embarked on very expensive cleaning exercises of gutters, streets and the city cemetery. The promotion of meaningful youth organizations is one of his prime agenda items.

Sillah states that despite the young man being deprived of getting the APC symbol in the 2012 national polls, his first development demonstration and facelift a week after elections was to fill in one of the mightiest garbage polls left by the previous Council leadership of former Mayor Moses Sesay at the city central market along Campbell Street. From that point, it is believed that Lam-Tales has done more than expected. A few weeks ago, Lam-Tales, Sillah  connected by using tons of bulk and broken stones on one of the inaccessible roads called “Flower Corner”  which is just a stone’s throw from the City Council Offices that links Station Road and Campbell Street. Rashly, it was bushy and eventually blocked by the unmonitored road construction Company (SALINI).

According to Lam-Tales, the cutting-off of Flower Corner was a factor to the many road obstructions around the clock-tower describing it as potential to derail urgent Police responses to crime and other related Police assignments since Flower Corner is one of the sole entry and exit into the Police station at Rogbane. The young man could be one of the very few who has rendered free electricity to a whole street around Father Street but vandalized by thieves and ill motivated individuals. On Friday 23rd August, Lam-Tales managed to mobilize more than one hundred young men and women to brushing the forested city cemetery as a means of complimenting the  lethargic and non-performing Council, Sillah informs.

Lam-Tales out of his citizenry ventures, currently commands about 280 unemployed youths within Makeni city. In that light, he forms an organization called the “Lam-Tales Job Seekers”. Every morning, he mobilizes all of that figure around the city in search of employment. Practically, he gradually succeeds in fitting the fittest but in gradual numbers. It is some part of this figure that Lam-Tales uses to undertaking some constrained Community development  challenges like the brushing of the city cemetery which is yet to be completed considering the broadness and bushiness of the cemetery.

Caked gutters in the city center of Makeni

Notwithstanding the people’s concerns, it is making the general rounds that the  Makeni City Council currently suffer from the monopoly and dictatorship of  two individual heads including the Mayor and the Chief Administrator who are said to have far  gone out of the All Peoples Congress (APC) political agenda by allowing themselves been easily and selfishly drifted away  by a few and supposed  assigned members to the previous APC Electoral College during the recently concluded national polls. Sources mutter that the said Electoral College cabal is otherwise remotely controlling the new administration to the best of their will and particularly at the detriment of national and Community development chances and possibilities. Additionally in their opinion, many of the residents smartly yearn for intensive investigations having noticed that the Deputy Mayor, Councilor Isatu Fofanah has become a pariah who has  been dumped and shunned from partaking actively her deputy Mayoral capacity duties as a result of some sacrosanct whose political way could not be easily shaken in this present day.

Abdulai Koroma, a diehard APC youth who claimed to have  campaigned tooth and nail for the APC  Party in that part of the country discredits that it is only in Makeni apart from the city of  Freetown where one still lives around  caked gutters with garbage within and around the city center. Koroma says that before the coming of this new Makeni City administration, there used to be what he called, regular general monthly cleaning exercises  on last Saturdays which is happening any longer. He says that the clock-tower remains dormant and the city market tentatively lodged with piles of garbage, forgetting and neglecting the possibilities of malaria and cholera that threatens the well being of residents. The city cemetery he pursued,  has turned into a very thick forest and a den of snakes which he says; is currently undergoing an intensive brushing and cleaning exercise by Lam-Tales regardless the inhumane financial extortion and deprivation meted on disturbed and bereaved families who go to bury their beloved ones.

Mariatu Bangura a city trader regrettably acknowledges that indeed the new administration stands to be the worse ever and cannot becompared to the previous despite the fact that she is part of those that voted the first female Mayoress of Makeni and much more, she is a woman. She stated that with all of the central government’s tremendous efforts with series of development projects including road maintenance, electricity, the free health care system and others, the current Council leadership is doing nothing in the areas of monitoring and supervision, Bangura vents out her views adding that project contractors do what ever they feel like in Makeni as if they go usually go into percentage negations with the City  heads. In the entire country she states, the operation “Waste Management and Decongestion” (WID), Makeni could be classed as the least performing despite the fact that I am a trader.”  The operation according to Bangura was bias, scattered and selective, having some of the traders that voluntarily quit the street  regrettably reoccupy their former places as a result of the Council’s lethargy. Commercial Motor bikes are raiding and disturbingly plying through the city market with no authority including the Sierra Leone Police Force (Traffic Division) fighting course as tax payers and only for the Council staff to constantly pressurize the poor traders for tickets, the concerned trader admonish this reporter.

Another disgruntled trader Mohamed Sesay ushers that they as traders voted the female Mayoress with a hope for  positive change but have got the worse ever. Take for instance, all of the efforts piled by the Lorry-Park traders to accessing the 24 hours electricity supply into the shops and malls, nothing meaningful has come out it apart from some of the exorbitant connections fees of seven hundred thousand Leones demanded by the Council when in the actual sense that cost could not surmount what is asked for. Sesay did not mince his words when he alleged that most of the City rate collectors are family members of the Mayor whose interests they primarily put forward.

A senior citizen Samuel Bangura acknowledges that  is true Councilors across the country are commonly marginalized, used, and refused as well as  their rights being abused by turning them into mere white elephants. But the situation in Makeni is seemingly worse as the very councilors are been tagged and labeled with obscure committee positions like health, education, works, information, etc., which they are never opportune to authoritatively work out. Justifiably, when it comes to a health committee Chairperson in the capacity of a Councilor to fairly representing the Council and the people in important and related issues, that Chairperson is without any reason, been pushed aside and otherwise represented by one of the two dictators of that Council for  no reason (s). That according to the crying masses has been one of the acute factors and tendencies propelling the likely failure of Makeni city to constantly dragging behind other major cities in the country that fast gripping the President’s “Agenda for Prosperity” and many other naked development activities and chances.

However, the parapsychology of having the people kept quite regardless the political and development damages for partisanship is getting over and the people this time have become hostile to that, one Morlai Turay in the center of Makeni says. According to Morlai, some of these nifty politicians and secret enemies of the state and President have likely turned  the “Agenda of  Prosperity” into an “Agenda for Prosper-Eating”. Morlai justified that the President needs to be very careful, vigilant and ready for further uncompromising cabinet reshuffles because most of these Politicians are diabolically planning to quit politics and their offices as the President goes out by early 2018. Above all, what development can the Makeni City Council administration boast of singularly doing the people continuously and vexingly ask.

Between prosperity and Sierra Leon...

That report on the state of human...