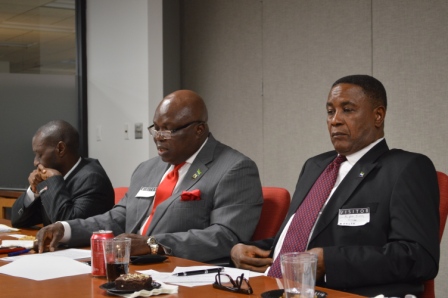 Speaking Monday August 5 2013 in Atlanta Georgia USA, during a meeting with Sierra Leone’s Transport and Aviation Minister Hon. Leonard Balogun “Logus” Koroma, Minister of Information and Communications & Government Spokesman Hon. Alhaji Alpha Kanu and other senior Sierra Leone Government officials, Delta’s Senior Vice President Perry A. Cantarutti said “Sierra Leone is making steady progress, and a place that is convenient to do business. It is one of the dynamic economic areas of the world.”

“We have appreciated you since our last meeting in 2011; we have had dialogue to examine how things are going. “We also congratulate you on the sustenance of peace and security to your country.

“Without joke, the progress and development in your country is enviable. Kudos to your Government and Country”.   Delta’s Senior Vice President Perry A. Cantarutti in charge of Europe, Middle East and Africa.

He said they “are pleased with the fact that the United States policy has new attention to doing business in some places in Africa for business and economic development, especially countries, where effective public private partnership thrives.

The Senior Vice President expressed appreciation for the visit of the two Government Ministers and their delegation, and said “ this is not a delegation of numbers, but a delegation of quality people, which shows that we (Delta Airlines INC.) is highly placed in the Sierra Leone Government Agenda.”

In a chronological order, Hon. Alpha Kanu expounded on the government’s “Agender for Change”, which formed the basis that enabled President Ernest Bai Koroma restructured the country and reorganized its infrastructure.

According to him,”the Agenda for change was such a success to an extent that the president had a second term without a run off – it was a knock out”.

“We now have the Agenda for Prosperity. “The country has been projected by the world – bank to be the second fastest growing economy: second to that of China. “We have made business easy: the government of President Ernest Bai Koroma is one of the top most reformist in the world.

Sierra Leone is one of the best and safest places to do business in the world. “We have enacted new laws to make things easier that will enable  private sector to get involve in business: but what is currently left out is the Aviation sector: which is why we want you(Delta) to come in.”  Said the Government Spokesman.

In addition to his outlining of facilities contained in the the overhauled Lungi International Airport, Minister of Transport and Aviation, Hon. Leonard Balogun Koroma waived any iota of doubt in one of the major US Airline operator’s mind, by informing them that there’s a new Airport in the works for the country’s mainland at Mamama.

“As I speak, the Exim bank of China has approved the sum of Three Hundred and Twelve Million United States Dollars ($312M) for the construction of Airport, and the government will soon before the end of the year break the ground. The construction will last for forty eight months hopefully in 2016.”

“Sierra Leone is known for its mineral wealth. Which are presently being exploited by foreign companies, which have also created employment as well as transferring knowledge to our people through foreign expatriate staff.

Agriculture, health education, energy and infrastructural development. Commerce and other small scale industries are high on the agenda for prosperity: and if these programs are to be successful, transport is a major catalyst.

That is why the Government of Dr. Ernest Bai Koroma is doing all it takes to attract not only businesses in mining and agriculture, but also in aviation to facilitate the movement of people and goods over long distances to and from Sierra Leone.”

Delta Airline is one of the United States Major Air lines with headquarters in Atlanta Georgia. It operates more than five thousand (5000) flights a day.

This is the 6th year of its operations in Africa.