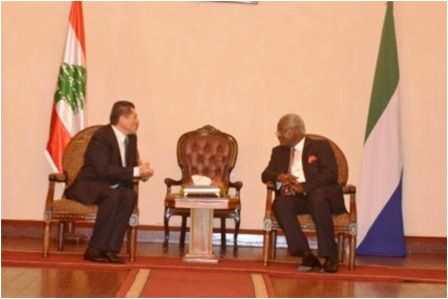 The Ambassadors of Lebanon, Nidal Yahyah and the Kingdom of Morocco, Majid Halim presented their Letters of Credence to His Excellency President Dr Ernest Bai Koroma at State House on Wednesday 24th July.  (Photo: Lebanese Ambassador and President Koroma)

Felicitating the newly accredited envoys, President Koroma expressed hope that they would work towards further strengthening bilateral relations and the already close ties between their respective countries and the Republic of Sierra Leone.

The National Anthems of Sierra Leone, Lebanon and the Kingdom of Morocco were played on their arrival at the Office of the President, State House, Freetown.

A quarter guard was also mounted by a detachment of the Presidential Guard in honour of the two Ambassadors.

The ceremony was attended by Vice President Alhaji Chief Sam Sumana, cabinet ministers, members of the protocol division of the Ministry of Foreign Affairs and International Cooperation and the State House Press Corps.