Homepages
Your trusted place for Sierra Leone and global news
Trending News
HomeFeatured“Let us seize the opportunity to build a better, more livable continent for all”: UN Development Chief for Africa

“Let us seize the opportunity to build a better, more livable continent for all”: UN Development Chief for Africa 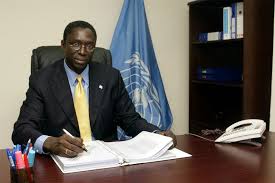 “Let us seize the opportunity to build a better, more livable continent for all”: UN Development Chief for Africa

Mr. Dièye was appointed to his post by United Nations Secretary-General Ban Ki-moon. A Senegalese national, he brings to the bureau and region years of distinguished experience, most recently as UNDP Chief of Staff and Director of the Executive Office.

“I know that working together, we will further our support of Africa’s development agenda and help programme countries we serve to move forward in achieving their development priorities”, he told RBA staff in Africa and at headquarters in New York, following the announcement.

Sub-Saharan Africa has grown strongly over the last decade as well as seen considerable improvements in human well-being. But the region faces huge challenges in making sure these advances benefit the many, and that the growth experienced by the majority of countries is equally distributed among a majority of people.

These include transforming African economies so they can sustain job creation for women and men of all generations, eliminating food insecurity and tackling key challenges as defined by the Millennium Development Goals (MDGs), such as maternal mortality and HIV and AIDS.

Mr. Dièye takes the helm of UNDP’s largest regional portfolio, which provides support to 46  countries  in sub-Saharan Africa, so they can build inclusive democratic governance systems, foster societies that can withstand shocks and long-term pressures, and create sustainable development pathways.

UNDP’s work will also involve working with the region to define and operationalize development priorities for the period after 2015, when the MDGs expire.

“Africa is growing in leaps and bounds,” said Mr. Dieye. “The region’s creative energy and sheer human progress over the last few years, coupled with its youth and thirst for openness, present incredible opportunities to create a better, more livable continent for all,” he added.

UNDP’s Africa Bureau has been equipping itself to provide more efficient and better targeted services to the region, including through the recent creation of a single Regional Service Center in Addis Ababa, Ethiopia, which will serve as an integrated network of expertise on the ground.

Prior to becoming UNDP Chief of Staff, Mr. Dièye served as Deputy Assistant Administrator and Deputy Regional Director of the Regional Bureau for Arab States, overseeing operations in North Africa, the Middle East and the Gulf countries.

Mr. Dièye has held several senior positions with the UNDP Regional Bureau for Africa, including Senior Economist, Chief Economist and Chief of Policy, and Country Director of Programmes and Operations for West Africa.

Before joining the United Nations, Mr. Dièye held a series of senior positions in Sénégal, including Chief of the General Planning Division in the Ministry of Planning and Cooperation.

An Ingénieur Statisticien Economiste, he graduated from the École Nationale de la Statistique et de l’Administration Économique of the Institut national de la statistique et des études économiques in Paris. He also holds a master’s degree in development studies from the Institute of Social Studies in The Hague.

Dr. Kandeh Yumkella to receive the...