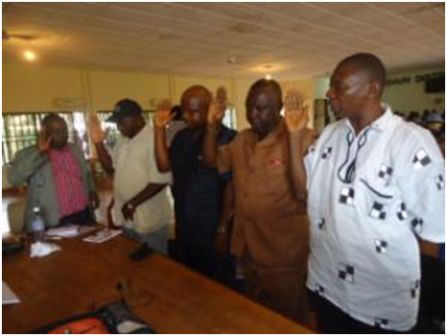 Pujehun, July 19 (SLENA) – The Parliamentary oversight committee on Finance and Economic Development was in Pujehun district last Tuesday to assess the level of performance by MDAs in that part of the country.  (Photo: Health officials in Pujehun District facing the Committee on finance)

The committee did not hide its displeasure over the poor monitoring mechanism in the health ministry, especially in the handling of funds allocated to the district medical authorities by both council and the central government.

After careful investigation of the primary health care system in the district, the oversight committee discovered that drugs supplied on cost recovery bases were being used for the free health care programme, thus contradicting the laws of the country.

The Finance also observed that the district medical officer, Dr. M.M.  Kargbo of the Government Hospital was unable to account for twenty-seven millions Leones (Le27m) worth of drugs supplied to them by the District Council  and that there is a disconnect between council’s operations and those of it devolved functions  particularly between the hospital and it Peripheral Health Units (PHUs).

One member of the committee noted that even procurement rules were being flouted by the council and recommended that the committee takes serious action on the matter as government money was going down the drain with impunity with no body to give account ofF moneys spent.