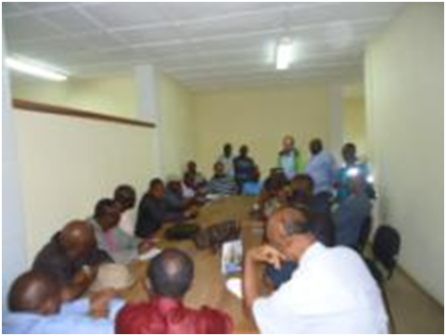 Pujehun, July 18 (SLENA) -The Chairman of Pujehun District Council, Mr. Sadik  Sillah has accused the Sierra Leone Investment Export and Promotion Agency (SLIPA) and that of the Ministry  of Agriculture  and Food Security for not addressing the issue of lease payment in the district, allowing  some companies to make less payment while others are paying higher.   (Photo: Officials from Socfin and members of the Parliamentary Committee on Finance charting the way forward)

The Chairman made this statement last week while the Parliamentary Oversight Committee on Finance was in Pujehun District to look into the financial matters of MDAS and other investment activities in the district.

Mr. Sillah informed the visiting delegation of MPs that while the company, Socfin was paying five US dollars ($5) per acre of land other companies such as Silva and the West Africa Agriculture were paying only two dollars ($2) per acre each to land owner.

The Chairman therefore urged the Finance Committee to look into the issue and address it with SLIPA and the Ministry of Agriculture because, according to him, it is bad for investors and investment generally.

He opined that if Sierra Leone was to generate better revenue from investment they need to address the issue of lease payment to land owners.

He informed the committee that many companies are operating in district but SLIPA, a body set up to help investors in the country, are not helping to address the rent issue.

Responding, the committee promised to investigate the matter but commended the Socfin agricultural company for investing millions of dollars into the country’s economy.

The Chairman of the Finance Committee, Hon. Hassan Sheriff and his team were impressed on by the activities so far undertaken by Socfin in developing  oil palm production in the country.

Briefing the committee at the Pujehun District Council, the Managing Director of Socfin, Mr. Philip Tonks pointed out that his company want Sierra Leone achieves sustainable oil palm production and make oil palm a much cheaper product for the people of Sierra Leone.

Answering questions from the committee on the relationship between the company and the community, MD noted that the working condition is 99% good and assured that his company will work in line with government policy set out in the Memorandum of Understanding.

He said the company is building the biggest mill in Africa, costing millions of dollars and that the total cost of the Socfin project in Sierra Leone is 122 million dollars, employing thousands of Sierra Leoneans while adhering to their  cooperate social responsibility.