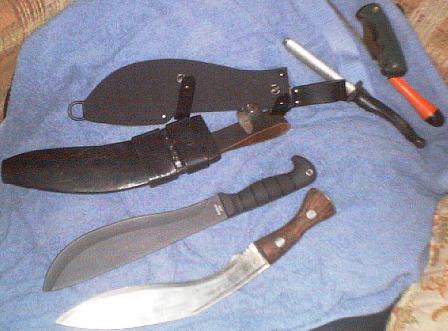 The Media and Public Relations Unit of the Sierra Leone Police Force is reported to have discovered the sale and proliferation of lethal knives also known as military hardware in the central business district of the capital Freetown.

Media Director, Assistant Superintendent of Police, Ibrahim Samura, told this paper that they were on a routine patrol under the programme ‘Crime Watch’, when his team discovered petty traders along Sani Abacha, Rawdon, Ecowas streets and their surroundings displaying and selling knives and daggers, which he said have the propensity to wreak havoc in the communities.

ASP Samura described these lethal instruments as offensive weapons that can be used by criminals, armed robbers and gangsters to perpetuate violence or to attack and rob others.

These weapons are being sold for as low a price as Le10-15,000 and are mounting fears that these deadly instruments are affordable and can fall into the wrong hands.  The police say amidst ongoing investigations some of these lethal arms have been seized and thus far they have also uncovered that these daggers are filtering into the country among other imported goods through the ports as they are manufactured in China.

Samura recalled that on one such ‘Crime Watch’ routine, the police earmarked some schools for an on-the-spot search in the bags of pupils. He lamented that it was a surprise to discover a cache of offensives objects in school bags ranging from knives, blades, screw drivers, broken bottles on to sulfuric acid.  The media boss argued that if school going pupils could be transporting such harmful objects in their bags they could as well be in position to purchase these new brands of knives that is now in circulation.

The police is however warning traders and importers of these deadly instruments to peacefully hand them over to the nearest police station or face the full consequences of the law.  This ugly development is worrisome and it must not be taken with a pinch of salt.

We have also heard of incidents where guns are being rented from Forces personnel for robbery and much has not been done about that.

We are currently co-habiting a society where ‘gangsterism’ is gradually taking center stage, not to talk of the spate of stabbings among the youth population.