President Ernest Koroma speaks on outcome of visit to China 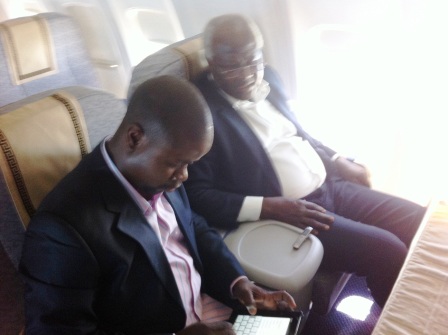 President Ernest Koroma speaks on outcome of visit to China

With this latest trip serving as his third visit as President of Sierra Leone, President Ernest Bai Koroma on Monday 1st  July ended a week-long visit to the Peoples Republic of China upon the invitation of the Chinese leadership and Tsinghua University where he was invited to deliver a speech at the 2nd World Peace Forum.

President Koroma who was accompanied by a number of state officials, including government ministers and staff from the Office of President, also had several discussions with China’s Export and Import Bank-Exim Bank; met with Chinese enterprises and representatives from a number of financial institutions. He also had the opportunity to meet with Sierra Leoneans in China, and admonished them to work very hard and endeavor to be part of the Agenda for Prosperity

Kingho Energy Group recently signed a Memorandum of Understanding with the Sierra Leone Government for the developing of mine and port in Sierra Leone. Further investment by the company in Sierra Leone includes the construction of supporting power facilities to maintain long term sustainable growth by securing a stable power supply for industrial use, the construction of a transport and logistics facilities, a 250 km railway construction starting from Magburaka in the north to Sulima in the south, with an estimated US $1.74 billion, amongst others.

From the perspective of agricultural investment, President Koroma also signed a 1.5 billion dollar agreement with Hainan Rubber Industry Group, which is expected to work towards the production of 193,000MT and 205,700MT or 4,114,000 bags per year which is expected to fee millions of people.  Agriculture and tourism were core discussion points of the Sanya City visit in Hainan Province as Hainan collects huge revenue out of tourism and they have expertise that Sierra Leone can benefit from.

Flying on Air China to Hainan Province from Inner Mongolia, we (Press Attaché, Sierra Leone Embassy in China and Communications Unit, Office of the President) caught up with President Koroma, to amongst other reasons know his impression about his visit to China, and to also know what were some of the outcome of his China visit.

It should be noted, that China and Sierra Leone entered into diplomatic relations in the early 1970s. Over the years both countries have been working tremendously in fostering the bars of cooperation ties. In this interview, President Koroma spoke of how impressed he was with the outcome of the visit.  Read the interview below:

What is your general impression about this your latest visit to China?

Well this came out as a very successful visit. I have visited a few times. I had more opportunity to interact with the leadership-the President, the Vice President and the Foreign Minister. They presented their own policy guidelines with the way they would want us to collaborate and move forward.

What can you say about the outcomes in terms of tangible results?

You know that they have made an offer of 250 million RMB, which was given to us as a grant with a commitment of supporting the construction of the Centre of Excellence and other ongoing programmes. But as a leadership they have stated that they will require more interactions at our levels; collaborations both at bilateral and multilateral levels.

Now for the projects we had already negotiated with the Kingho Group and the Hainan Group, I have visited one of the outfits of Kingho. Am sure we are all impressed with what we saw. There was a great commitment on the part of the chairman to replicate the kind of industrial park that they have in Inner Mongolia in Sierra Leone. They have already signed a 6.5 billion dollars agreement with the Sierra Leone government to develop a mine and a port.  Our visit was impressive.

Again, the Hainan Project is a project that we have negotiated and we are now going to conclude the negotiations by signing. It is also 1.5 billion dollars that will grow rubber and embark on irrigation of rice. We have also concluded discussion on the airport project.

Of course, I had the opportunity of meeting Sierra Leoneans in the embassy and I admonished them to work very hard and endeavor to be part of the Agenda for Prosperity.

There was also an issue on building our human resource capacity?

The Kingho Energy Group is committed to supporting Sierra Leoneans to come here (China) and be trained, especially those that will be interested in involving in their outfits. They are also committed to support efforts of government projects to the tune of about 10 million dollars. The Chinese leadership has also indicated strong commitment to support the development of our human capacity with frequent in-house trainings of government officials and other employees to enhance their professionalism in what they are doing and also learning from the Chinese experience.

Can we relate these outcomes to the prosperity agenda?

(Note.  Agreement with Hainan was signed after this interview. President Koroma has departed for Sierra Leone via Hong Kong. Look out for Ambassador Foh’s view on the just concluded visit.)