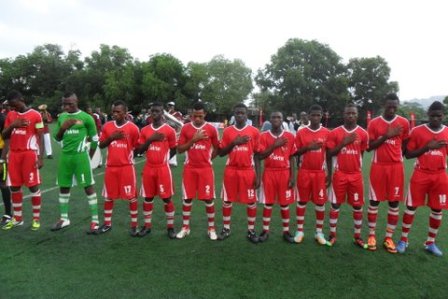 Mahmoud FC and Kallon FC Junior have both been crowned champions in different categories of the Airtel Rising Stars (ARS) Western Area regional tournament that came to an end at the Sierra Leone Football Association (SLFA) academy ground on Sunday.

Alimamy Bundu put Kallon FC ahead in the 12th minute when he finished up a cross from the left wing before Saidu Fofanah scored from outside the box with a well taken right-footed volley five minutes later to increase their lead to 2-0.

Med Mans reduced the scores as ten minutes after the break after skipper Abdulai Mansaray beautifully converted a penalty. They fought very hard to equalise but never succeeded.

Rural Kings finished the tournament in third position after defeating Area Best 3-1 on penalties after it ended 2-2 at full time.

A second half goal from midfielder Sarah Bangura known as Saradinho gave Mahmoud FC a 1-0 victory over Young Stars to win the grand finale of the girls’ category and ensured that they retained their title.

The two sides had met before in the tournament’s opening game with the champions winning 4-1.

Med United finished third position. The newly crowned champions for the two categories received a cash prize of Le 1m each whilst the runners-up teams got Le 750,000 each. The third placed teams bagged Le 500,000 each.

Already the technical committee of the ARS Western Area tournament has selected 18 players each for both categories to represent the region at the nationals in Makeni , and the names will be announced by Airtel on Tuesday.

“The tournament was good and I’m pleased with it. I believe we have achieved our main goal which was identifying talents.”

He added: “We provided the environment for the players to showcase their talents and they’ve done exactly that.”

The ARS regional tournament takes centre stage in Kono from Thursday to Sunday.

Article and photographs by Mohamed Fajah Barrie in Freetown

Strong leadership is a critical de...