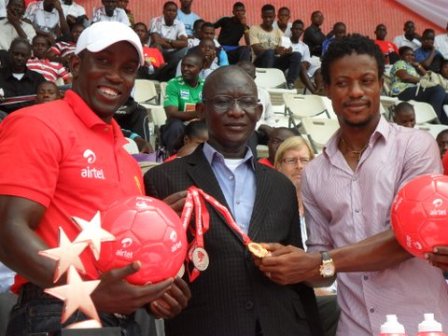 The team owned by Sierra Leone footballing living legend Mohamed Kallon will face the winner of group B Med Man’s who walloped Rural Kings 4-0 on Saturday.

There will be a third-place play-off game between Area Best and Rural Kings of Waterloo before the must watch grand finale at 16:00GMT.

In the girls’ category Mahmoud FC who thrashed Real Friends 4-0 in their final round-robin game on Saturday with Fatmata Mansaray alias Messi again scoring hat-trick to take her tally to 7 goals in the competition will lock horns with Young Stars in final also on Sunday at 14:00GMT.

Young Stars reached the final after they defeated Med United 3-1 on penalty shoot-out just after their 2-0 victory over Pama Queens on Saturday.

Both Med United and Young Stars were tied on the same number of points and goal difference, and that was why penalty shoot-out was needed to decide the runner-up to join Mahmoud FC in the final.

At the end of the tournament, the names of selected players in both categories will be announced to represent the Western Area region in the nationals in Makeni.

For killing of ex-US Marine GOSL/S...

Strong leadership is a critical de...