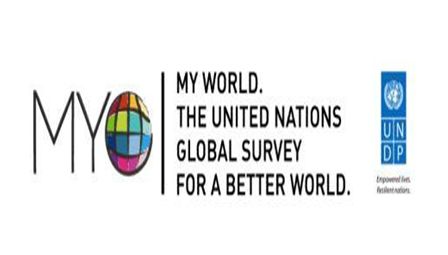 New York, 16 May 2013 – Over 560,000 citizens from 194 countries have already voted for the issues that would make the most difference to their lives, providing, for the first time ever, real-time and real-world intelligence on what people think about the biggest challenges facing them and their families.

MY World, the United Nations global survey for a better world (www.myworld2015.org) is a groundbreaking initiative inviting citizens to virtually take their seat at the UN and participate in the global conversation on the next development agenda by voting in an option-based survey.

From Rwanda to Philippines and Mexico City to Amman and Madrid; across schools, mosques, offices and refugee camps, citizens have been turning out in their hundreds of thousands to vote and help define a better world for all.

In India, Laila Sein, of MY World partner AFRC INDIA, remarked: “The best thing I found about the survey is that our students have started thinking beyond cricket and mobile phones. They have begun thinking about critical issues that affect them.”

Initial results from this survey have been released this week as the UN Secretary-General’s High Level Panel for the post-2015 dialogue meets in New York to submit their recommendations on the future international development agenda. Real time results from MY World are also being presented on a regular basis to the UN Secretary-General and the Open Working Group on Sustainable Development.

To date, 57% of the votes have been collected offline, 35% though the website and around the 8% have come through mobile phone.

“We are using mobile phone and web technology as well as conducting surveys face to face to directly connect with people. This is allowing us for the first time to see in real time who is voting, from where, and what their priorities are”- highlighted Corinne Woods, Global Director of the UN Millennium Campaign – “MY World is a powerful tool for national as well as global decision making. These half a million votes are just a start – we have until 2015 and beyond to continue gathering people´s views and maintain this conversation flow between policy makers and citizens around the world.”

MY World demonstrates the UN’s commitment to an open and inclusive dialogue on the post-2015 agenda and harnessing the full power of technology and social media. MY World is supported by over 400 civil society organizations, youth groups, faith organizations, corporations and global personalities.

“We are getting a rich mix of data that is generating important information not only on global priorities, but also how these differ by characteristics: gender, age, location and education level. So far there seems to be a strong overlap of priorities among regions. Education, health, water, food, “an honest and responsive government” and “protection against crime and violence” feature amongst the top ten for every region of the world”– said Claire Melamed, from the Overseas Development Institute.

What are global citizens saying?

Participants in MY World are asked to select which six out of sixteen issues are most important for them and their families. Results to date reveal that voters’ top three priorities are “a good education”, “better healthcare” and “an honest and responsive government”. “Access to water and sanitation” and “nutritious and affordable food” are also perceived by people as being of key importance to improving their lives.

Citizens voting predominantly for health and education reveal the continuing relevance of the Millennium Development Goals (MDGs) which recently observed the 1000 day milestone to their 2015 target date. MY World represents an entry point for people to build on MDG achievements and help define an ambitious development agenda after 2015 that has poverty eradication and sustainable development at its core.

However, results also indicate that people are pointing to new issues to be addressed, such as “an honest and responsive government”, “better job opportunities” and “protection against crime and violence”, which also rank within the top seven priorities.

MY World has generated extremely positive  and  powerful responses across the world, as demonstrated  by Oyebola Folajimi Kehinde, one of the thousands who participated in the offline representative survey in Nigeria: “The final statements most of the grassroots people kept hammering on was that “let’s all hope they do something tangible with the newly collated data.”

Until 2015, the UN and partners continue to invite men and women everywhere to vote in MY World and contribute to shaping a better world together.

About MY World voters so far:

Beneficiaries of a UNIDO training...

Why Leones and Cents are becoming...