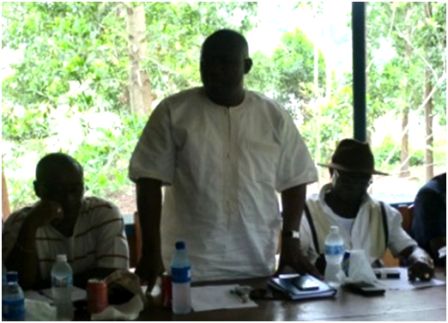 Speaking at the office of the Resident Minister East in a meeting with land owning families on the 10th May 2013, the Lands Minister warned people who owned houses and structures on government land to move out.

He said government recognizes the fact that land in the provinces belongs to landowning families but that reserved lands for government for development purposes should not be encroached upon by anybody, stressing that his ministry will soon serve quit notices to people occupying government land, particularly in the airfield and government reservation in Kenema, to vacate or their houses and structures would be demolished within the shortest time frame. “Those reserved lands were acquired during colonial era from landowning families with compensation for future development, so nobody has the right to sell or buy them,” said the minister.

He catalogued his ministry’s plans for land in the country. He said government through his ministry is planning to survey land for landowners in the provinces through what he called as “biometric land survey system,” which he said will reduce land palavers in the provinces. The Hon. Minister maintained that about 40% of the conflicts in the country are connected with land. He said to avoid that government is working on projects to survey all land for landowning families and a security card will be issued and handed to them. The Hon. Minister stated that those cards will even be used to acquire loans from banks to farm the lands and other financial activities.

He however asked people to stop building houses on swamplands as it has unpleasant climatic conditions.

Contributing at the meeting, the Paramount Chief Alhaji Amara B. Vangahun, who gave the welcome address, asked the minister to deal with people encroaching on government reserved land, especially the airfield and government reservation in the city. He said people are selling land in the city indiscriminately and that it is anti-future development. PC maintained that they have several landowners and chiefs in the chiefdom but that they are not genuine and that decision will serve as lesson.

In his contribution, the Resident Minister East, Hon. William Juana Smith, asked landowning families to consider future development when selling land, particularly in Kenema which now has a city status.

Speaking on behalf on landowning families, Chief Amara Fanjaka welcomed the minister’s decision on the ground that they cherish development in the city but appealed to the minister to help survey their land as promised against crooks or land grabbers in the city.