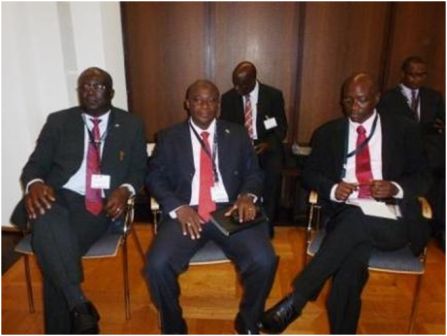 With an IMF growth rate projected at around 10.3% in 2013, Sierra Leone has one of the fastest growing economies in Sub-Saharan Africa. With the potential for future growth even higher, the country is making economic history considering the destruction it witnessed during the civil war over a decade and a half ago.  (Photo: Ambassador Stevens, Kwame Yankson and HOC Kondeh at the African Business week)

These achievements are no miracles! They come on the back of sound economic and good governance policies instituted by an Ernest Koroma led APC government which took over at a time when the country was heading in the wrong direction.

While the right environment is being created at home, the government through its assiduous missions abroad has being working tirelessly to rebrand the image of the country as one of the most promising destinations in Africa to do business.

It was against this backdrop of continuing and sustained efforts at attracting investments and meaningful cooperation that the country last week joined its African counterparts to participate in a leading investment-in-Africa fair in Frankfurt – the Africa Business Week. The business week is the only event in Europe which dedicates a full week entirely to business relations with Africa.

The profile of the organizers of the event, the German-African Business Association and the Maleki Communications Group speaks volume of the significance of the occasion when it comes to investment in Africa:

The German-African Business Association is the national trade association of German foreign companies and institutions with economic interests in African countries. The association provides information on countries and markets in Africa, establishes contacts and represents the interests of its members at home and abroad.

Maleki Communications Group is a company specialized in the design and implementation of conferences. It is one of Germany’s market leaders, especially with high-end conferences such as the Euro Finance Week and the Global Business Week. It enjoys a long-established network in the financial industry.

With Germany being one of the leading manufacturing countries in the world, there cannot be a better place for Sierra Leone´s delegates from the Ministry of Information in Freetown and Sierra Leone’s Embassy in Berlin to share ideas and discuss huge investment opportunities in the small West African state.

Germany´s Federal Minister of Economics and Technology, Dr. Philipp Rösler in his welcome address highlighted the importance of the business week, describing it as “an outstanding opportunity to further deepen German African relations” adding that a host of economic partnerships are helping to make the foundations for trade and investment in Africa even stronger.

On his part, Federal Minister for Economic Cooperation and Development, Dirk Niebel, noted that “the aim of German development cooperation is that Africa will increasingly become able to solve its own problems in a sustained manner and realize its full potentials.” He stressed that working in partnership will help achieve such aim.

According to the Chairman of The German-African Business Association, the Motto for the 2013 event “Doing Business – Sharing Success” clearly stressed the fact that Africa is a continent where business grows fast but that such growth should be complimented with partnership.

During the week-long event, several pertinent topics relating to business and technological development in Africa with practical examples from Germany were discussed. These included among others: Agribusiness, health care, energy, water, resources and mining, high-tech infrastructure and logistics, finance and investments as well as vocational training.

The Sierra Leonean delegation was afforded the opportunities for know-how building, one-to-one networking and cooperation with business and investment gurus in Germany as well as other parts of Africa.

With potentially enormous benefits that could be derived from such Cooperation with specifically German firms and business executives, one particular area the Sierra Leone government will be hoping to attract investment is the Information Technology (IT) sector. With the landing of the Africa Coast to Europe Submarine cable – fibre optic cables, the government with support from the World Bank has since recruited Consultants to review the 2006 Telecom Act with a view to catch up with current global trend in ICT development.

The proposed Act will emphasize the liberalization of the international telecommunications and internet Gateway thereby removing the current monopoly enjoyed by Sierratel.

Although Government has divested 52% of the shares of Sierra Leone Cable Limited, the remaining shares are open to private sector investment. Government is therefore encouraging more investors to invest in broad band infrastructure.

Similarly, with the Ernest Koroma led government prioritizing education and skills training as catalysts for growth in its last elections manifesto, another area Sierra Leone could immensely benefit from its participation in the business week is to build on the partnership with German firms who are very well known around the world for their strengths in skills and vocational training. With no less a person than the German Minister for Economics and Technology declaring that such firms are willing to share their experiences with African partners in this field, our nation should take a huge advantage of such opportunity.

Despite the fact that two areas have been singled out here, it is clear that the benefits of participation in such international fairs for a country like Sierra Leone trying to open up on the international business front are enormous. We should continue to tread such a path because it is only through cooperation and partnership that we will be able to attract meaningful investments and build a stronger foundation for economic growth.

Conclusion of WIMSAL National and...