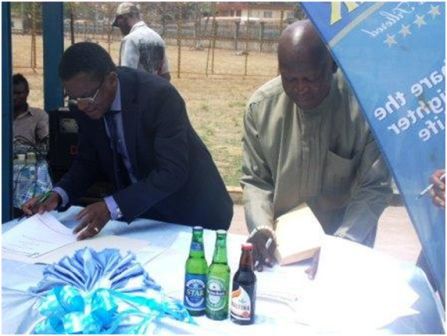 In America, England, China, and other highly developed countries, farmers are among the richest, but in Sierra Leone it is the reverse; our farmers are the poorest among the poor. Most of our farmers farm to survive hunger, not to amass wealth. So, there is need for the empowerment of our farmers to make them economically strong and this is exactly what Sierra Leone Brewery Limited (SLBL) is doing.  (Photo: SLBL and SLARI signing the MOU)

SLBL has launched a massive “SORGHUM” production project, giving financial support and seedlings to farmers in various parts of the country to locally produce large quantities of SORGHUM which the company uses to brew Heineken. The Brewery is providing a ready market for the farmers by buying from them all the SORGHUM they produce, by so doing, economically empowering the farmers and saving the cost and labor of importing SORGHUM.

On Wednesday, April 24th 2013, SLBL launched the SORGHUM Community Revenue Enhancement Agricultural Technology Extension (CREATE) Project, and signed a Memorandum of Understanding with the Sierra Leone Agricultural Research Institute during an impressive ceremony at the company car park at the Wellington Industrial Estate in Freetown. The launching occasion was graced by the Minister of Trade and Industry, Honorable Alhaji Usman Boie Kamara, the Minister of Agriculture Dr. Sam Sesay, and the Chief of Staff State House, Dr. Richard Conteh.

At the launching occasion, Honorable Boie Kamara lauded SLBL for involving smallholder farmers as major suppliers of the raw material, describing the venture as a step in the right direction. He also commended the company for taking the initiative to utilize locally produced SORGHUM, for industrial beverage production. The project, he noted, ensures a ready market for the farmers who will use the proceeds from such project to support themselves, hence alleviating their poverty. The Trade Minister said the project also supports our government’s drive to make agriculture and industry sustainable in the country.

In his statement, the Minister of Agriculture, Forestry and Food Security, Dr. Sam Sesay, showered praise on SLBL for buttressing the efforts of his ministry in promoting especially smallholder farmers. He stressed the importance of empowering small scale farmers for SORGHUM production. He advised that mechanized SORGHUM production may not yield the desired fruits as most of our farmers do not have the capacity to embark on large scale mechanized farming.