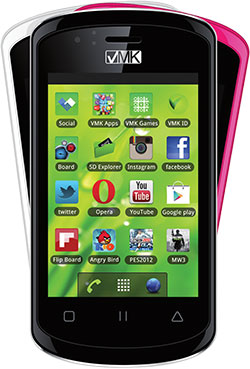 Excitement greeted news that Vérone Mankou, the 26-year old entrepreneur from the Republic of Congo, has designed Africa’s first smartphone and a tablet, the hand-held computer that comes with a touch screen.  (Photo: The VMK elikia smartphone. Photo: VMK)

Mankou’s tech company, VMK, designed the sleek smartphone and tablet, which was originally conceived in 2006 as an affordable computer to give Africans access to Internet. The devices run on Google’s Android software and are assembled in China, making some technology analysts question Mr. Mankou’s assertion that these were the first African touchpad tablet and smartphone. In response to such criticism, Mr. Mankou writes on his website, “We are somewhat offended by the disregard of those who persist in denying the authentication of our products, despite evidence.”

To reinforce the Made-in-Africa claim, Mr. Mankou named his smartphone Elikia, for “hope” in Congolese Lingala dialect. The official name for the tablet is Way-C, and it comes with wireless internet connectivity and four gigabytes of internal storage. Elikia has rear and forward-facing cameras and a 3.5in (8.9cm) screen, 512MB of RAM, and a 650MHz processor. Mr. Mankou plans to sell the devices across African countries as well as in Belgium, France and India.

VMK’s smartphone will have to compete against established brands such as Blackberry and Nokia, while the tablet has to face Apple’s iPad, Samsung Galaxy and others. About his smartphone, Mr. Mankou says, “We wanted to place on the market a quality smartphone with the same capacities as the others, while ensuring that it’s a product which is accessible to all.”

Mr. Mankou hopes to rely on pan-African sentiments. There appears to be an increasing desire among some in Africa to support homegrown products. Recently, for instance, there was a minor incident with app purchasing when Google Play did not accept credit cards issued in the Congo. VMK announced its own app store with apps “developed by Africans for Africa” and prepaid gift cards to give Africans a similar experience.

Several technology bloggers in Africa believe VMK’s devices, which are currently available through telecom carrier Airtel with the possible addition of MTN and Warid, could still expand their reach and compete on the international market. The Congolese entrepreneur has set big ambitions for his devices, “Apple is huge in the US, Samsung is huge in Asia, and we want VMK to be huge in Africa,” he says.