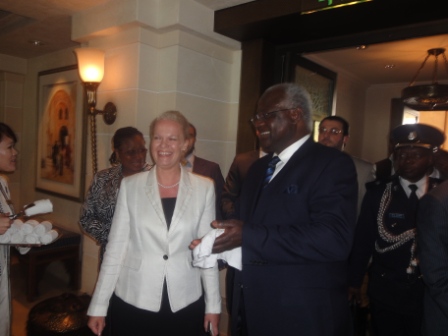 March 30, 2013 – Sierra Leone’s President Dr. Ernest Bai Koroma today arrived in Dubai on a three-day official working visit.  The President was officially invited by the Vice President and Prime Minister of the United Arab Emirates and Ruler of Dubai, His Highness Mohammed Bin Rashid Al Maktoum as a Guest of Honour at the Dubai World Cup Race.  (Photo: President Koroma on arrival at the Jumeirah Hotel)

In an acceptance letter addressed to His Highness the Prime Minister, President Koroma wrote: “It is my fervent hope that the occasion will offer yet another opportunity for us to further strengthen the friendly and bilateral relations between our two countries and peoples.”

President Ernest Bai Koroma on arrival at the hotel in Dubai

Ambassadors of Saudi and Kuwait after receiving the President

According to the World’s free encyclopedia, Wikipedia, the Dubai World Cup Race is a horse race held annually on the last Saturday in March since 1996 and contested at the Meydan Racecourse. The race is operated through the Emirates Horse Racing Authority (EHRA) and its one of the world’s leading thoroughbred breeding and racing operations. The race carries a total combined prize of $ 27.25 million and it has a purse of USD 10 million since 2010, making it the world’s richest horse race.

The President was received at the Dubai International Airport by Sierra Leone’s Ambassador to the Kingdom of Saudi Arabia, HE Wusu B. Munu  also accredited to the UAE and Sierra Leone’s Consul-General, Mr. Bahgie Annan.

Nightmare in Paradise: Four for Fo...