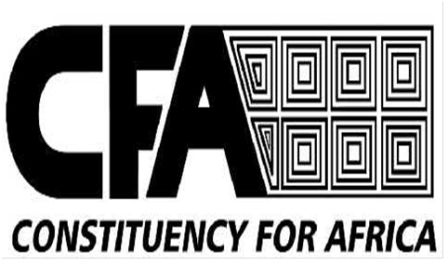 Washington, DC – A delegation of Diaspora leaders organized by the Constituency for Africa (CFA), met with the President of Sierra Leone, H.E. Ernest Bai Koroma, March 28th,  in downtown Washington.   The meeting was planned to discuss ideas and strategies for the Diaspora to engage with and support economic development in Sierra Leone and in West Africa.  President Koroma was in Washington along with the Presidents of Senegal, Cape Verde and Malawi, to meet with President Barack Obama later that day.

The delegation was lead by Stanley L. Straughter, CFA’s Chairman and Melvin Foote, President and CEO.  Other members of the delegation included well known Panafricanist, Dr. Julius Garvey, Ambassador Robin R. Sanders, who served in Nigeria and the Republic of the Congo, Ambassador Shirley Barnes, who served in Madagascar, Kendal Tyre, a partner in the NixonPeabody Law Firm, Chinonso Emehelu of Exxon Mobil, McDonald Homer, the Director of Sustainable Development at the United States Agency for International Development and Jeannine Scott, the President of the US and Angola Chamber of Commerce.

President Koroma spoke on a plethora of impacting issues ranging from economic growth and development to establishing effective business partnerships.   Said President Koroma, “through no fault of our own we have been separated from each other over the years and throughout history.  Today we must get back to our roots and re-engage with our brothers and sisters.  We believe that history is history, and Sierra Leone has not lost that desire to reconnect.”

President Koroma iterated staunch support for the Diaspora and belief that the Constituency for Africa could be a very reliable partner for Sierra Leone in harnessing the Diaspora in North America and in the western hemisphere.  He spoke of the large numbers of African-Americans who have traced their DNA lineage to Sierra Leone and stated that it is time now for Diaspora to return to Sierra Leone and to Africa to help build the leading continent of the 21st century!

Dr. Julius Garvey, the son of the pioneer of Modern Black Nationalism, Marcus Garvey, echoed President Koroma’s sentiments by affirming, “This is indeed a devine meeting, and our ancestors are smiling down on us tonight.”