AU PSC devotea Open Session “Women and Children in situations of violent conflict in Africa: Contribution and Role of Women” 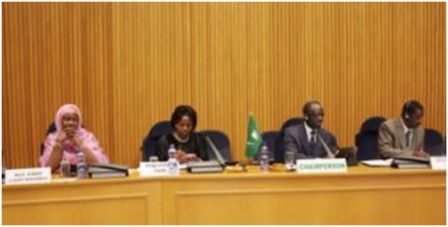 AU PSC devotea Open Session “Women and Children in situations of violent conflict in Africa: Contribution and Role of Women”

The Peace and Security Council of the African Union (AU), at its 364th  meeting held on 26 March 2013, devoted an Open Session on the theme: “Women and Children in situations of violent conflict in Africa: Contribution and Role of Women”. The meeting was held pursuant to the decision adopted by Council at its 223rd meeting held on 30 March 2010.  (From L-R) Dr. Asmau Abdulkadir, Representative of First Lady of Nigeria and Special Adviser to President on Gender, Ms. Litha Musyimi-Ogana, Director, Women and Gender Development(WGDD ), Amb. Paul Bulus Zom Lolo, Chairperson of the PSC for the Month of March and Dr. Admore Kambudzi, Head, PSC Secretariat

Council took note of the statements made by the Representative of the AU Commissioner for Peace and Security, the Director of Women, Gender and Development Directorate (WGDD), the Representative of the First Lady of the Federal Republic of Nigeria, H.E. Dame Patience Jonathan, AU Member States and partners, as well as by United Nations agencies (UN Women and UNICEF)[1].

Council welcomed the solidarity statement from the African Ladies Peace Mission and African Women Mediators and emphasized the important role these organizations and other civil society organisations play in the peace and security arena.

Council stressed the need to seize every opportunity to mainstream gender into the African peace and security agenda and to promote women’s empowerment and contributions.  Council recognized the growing contribution and presence of women in peacekeeping operations. While the number of women among the uniformed personnel – military and police forces- remains limited, active steps should be taken by peacekeeping missions to increase the number of civilian positions held by women. Council recognized the growing awareness that increasing the presence of women in peacekeeping and other critical actors greatly enhance conflict resolution and post-conflict rehabilitation processes and ensure that the needs of women and population at large are integrated in the negotiations and peace agreements.

Council recognized the fact that, whilst the necessary instruments for the protection of women and children in armed conflict and for the promotion of their rights exist, the pace of implementation of those instruments is deplorably slow. Council accordingly, called for their full implementation.

Council emphasized the responsibility of Member States for ensuring the protection of women and children in situations where they are threatened or affected by violence, in line with relevant AU and international instruments.  Council condemned the use of sexual violence as a weapon of war and emphasized the need to fight impunity in cases of sexual violence and rape in situations of conflict and stressed the need to hold accountable perpetrators of these acts.

Council took note of the ongoing efforts of the Commission to respond to the 2010 call of Council to bring the issue of women and children at the center of its work with the view of developing strategies at the continental, regional and national levels, to facilitate monitoring of the situation of women and children in conflict.

Council reiterated the fact that a focus on women and children brings into sharp focus the wider human security dimensions of the AU Peace and Security Agenda, as articulated in the Solemn Declaration on a Common African Defense and Security Policy (CADSP), adopted by the 2nd Extraordinary Session of the Assembly of the Union, held on 28 February 2004, to the extent that conflict in Africa cannot be delinked from the challenges of reducing poverty and promoting health, development and education, especially as the OAU/AU celebrates, in May 2013, its 50th Anniversary of tackling these very challenges.

Furthermore, Council commended the Commission for the measures being taken to enhance the gender perspective, into all aspects of the Peace and Security Department’s work, especially within the framework of the African Peace and Security Architecture (APSA), various policies and activities, through building gender capacity and accountability. Responsibility for the implementation of a gender policy must be diffused across the organization structure, rather than concentrated in a small central Unit. These efforts should include, on the one hand, the consideration of the appointment of a Special Representative on violence against women and children in the context of armed conflict, on the other hand, regular training sessions for AU Headquarters and field staff to strengthen their skills in gender mainstreaming in line with UN Security Council Resolution 1325 (2000) and subsequent resolutions. These trainings are an important measure to increase awareness of the AU personnel on gender issues in the context of conflict prevention and response.

Council welcomed the progress made towards the refinement by the Women, Gender and Development Directorate (WGDD) and the Peace and Security Department (PSD), of the AU Gender Training of Trainers (ToT) Manual for Peace Support Operations (PSOs), including the Code of Conduct, and the Trainers’ Guide, which also target the African Standby Force (ASF) and its contribution to engendering African Peacekeepers.

Council further recommended that the final version of the Third AU Commission Strategic Plan for the period 2014-2017 has to contain a comprehensive overview of specific actions, achievements and challenges to the implementation of the women, peace and security agenda, in particular those concerning the participation of women in mediation and preventive diplomacy.

Council noted the progress made by Member States and members of the African Peace Support Trainers’ Association (APSTA) for availing their personnel and noted plans to include Centers of Excellence and emphasized the importance of APSTA members being trained as ToTs on gender and use of the AU Gender ToT Manual for PSOs in their future training.

Council noted the progress made by Member States on the ratification and implementation of the Protocol to the African Charter on Human and Peoples’ Rights and other pertinent international instruments. Council further took note of the progress made by Member States to submit their reports on the Solemn Declaration on Gender Equality in Africa (2005) and the African Charter on the Protection and Welfare of the Child (1999), as well as the AU Convention for the Protection and Assistance of Internally Displaced Persons in Africa (2009).

Council agreed to convene the next open session on women and children in situations of conflict in Africa in September 2013.

Council agreed to remain seized of the matter.

[1]  Twenty four (24) participants from Member States, bilateral and multilateral partners, as well as civil society organisations took the floor during the open debate.

Share With:
Tags
Peace and Security Council of the African UnionWomen and Children violent conflict in Africa
Previous Article