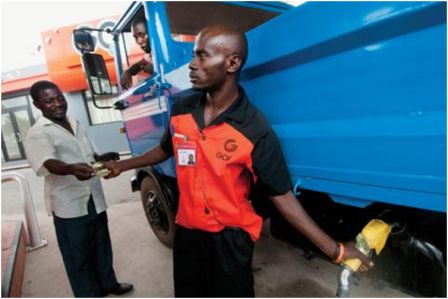 When the oil rigs started pumping crude off the coast of Ghana’s Western Region in December 2009, many people hoped for better living standards and development. They wondered whether Ghana would be able to break the “curse” that has often marked Africa’s oil and mining industries: decades of extraction that often saw only a few getting richer but the majority getting poorer.  Filling a truck with diesel fuel at a Ghana Oil station in Accra: One of Africa’s newest oil producers, Ghana has put into place laws and institutions to help ensure that oil revenues are not wasted or diverted, but benefit the country’s development.  Photo: Panos/Jenny Matthews

For Ghana, an example of such a problem is very close to home. Nigeria, its West African neighbour — and one of the continent’s largest crude producers —depleted the estimated $400 billion earned from crude oil sales since the 1970s. Besides, Ghana’s own record in managing mineral revenues after a hundred years of gold mining was not the best.

But it seems that a new dawn has broken. Steve Manteaw of the Civil Society Platform on Oil and Gas — a coalition of civil society groups that promotes transparent and accountable management of oil and mineral wealth — told Africa Renewal that “Ghana is on the right path because it has in place a law that governs how the oil revenue is collected and managed.”

Experts have described Ghana’s Revenue Management Act — passed more than a year after the first oil was pumped from the country’s Jubilee Field — as an “innovation.” The law outlines clear mechanisms for collecting and distributing petroleum revenue. It specifies what percentage should help fund the annual budget, what should be set aside for future generations and what should be invested for a rainy day.

Petroleum revenue contributed 4 per cent of the government’s total capital spending in 2011. The funds went mainly to investments in road infrastructure, but also to building the capacity of the oil and gas sector, repaying loans and strengthening agriculture, most notably for fertilizer subsidies.

In devising its law, Ghana borrowed from best practices in Norway, East Timor and Trinidad and Tobago, which have developed laws to better govern oil and gas exploration and production, and to manage the revenues.

Rarely are citizens’ groups given a chance to oversee how natural resource revenue is managed in Africa. That is why experts have hailed the creation of Ghana’s Public Interest and Accountability Committee (PIAC) under the provisions of the petroleum revenue law. Civil society groups lobbied vigorously for the 13-member committee drawn from organized professional bodies, think tanks, pressure groups, among others. The body serves as a platform for public debate on how petroleum revenues are spent.

The PIAC also monitors and evaluates compliance with the law, provides an independent assessment of petroleum production and receipts, and publishes its findings in half-year and annual reports. A report issued in May 2012 covering oil production in 2011 found that its revenues provided the government with considerable fiscal relief. The law alone, experts say, does not solve all the problems. There is a need to monitor how government spends its annual budgetary allocation.

African governments often lack the capacity to effectively monitor resource production. Yusupha Crookes, the World Bank’s country director in Ghana, recently commented, “A mining fiscal regime is only as effective as the combined administrative capacity of the government institutions charged with enforcing it.”

Mr. Crookes argued that “it is important to have systems and processes in place to effectively address oil, gas and mining tax payments administration,” since “the general tax system may not be efficient enough for the extractives sector.”

Emmanuel Kuyole, Africa regional coordinator of the Revenue Watch Institute, an international non-profit policy body headquartered in New York but with a major office in Ghana agrees. In Ghana’s case, he stresses the need to put in place all the various committees provided for by the law, and to strengthen institutions like the Petroleum Commission and the unit of the Ghana Revenue Authority involved in monitoring production and the determination of revenue.

Ghana may need to look at how revenue paid by mining companies is determined and who is calling the shots, says Kwaku Boa-Amponsem of Boas and Associate, the lead consultant for the Ghana Extractive Industry Transparency Initiative’s multi-stakeholders group.

Sometimes all that is needed is to make the law clearer. In Ghana, complexities under the tax law in computing mining royalties meant that firms paid the lowest rate for many years. After a review of the law last year, revenues are now expected to increase substantially.

Across Africa new oil fields are being discovered. Chad, Côte d’Ivoire, Liberia and Mauritania have all discovered oil in commercial quantities. And in the last couple of years new discoveries have been made in Angola, Cameroon, Gabon, Niger and Sierra Leone, while extensive exploration is ongoing in a number of others. East African neighbours Kenya and Uganda are poised to become major oil producers in the near future.

Dr. Manteaw of the Civil Society Platform on Oil and Gas thinks there are lessons for Ghana and for African oil-producing countries. “Where countries have effectively used natural resources to transform their economies and the lives of their people,” he points out, “the countries themselves have been active participants in the sector and work towards ownership by buying shares in the producer firms or reinvesting the revenue and living off the dividends, like Botswana.”

Professor Paul Collier, director of the International Growth Centre, a UK research institute, expressed similar views during a recent visit to Liberia. He said that the discovery of oil there could either end poverty or increase it: “If you find yourself at the crossroads, it’s your determination that can lead you to the case of Botswana or Ghana and not other worse oil scenarios in the world.”

After decades of oil production and billions of dollars in revenue unaccounted for, Nigerians are hoping that the country’s new Sovereign Wealth Fund — if managed well — will improve living standards. Angola, Africa’s second largest oil producer, is also considering setting up such a fund.

Overall, Mr. Manteaw argues, the processing of licences and negotiation of contracts in Ghana and other countries “must be made transparent through competitive bidding.” For its part, Ghana has started well and needs to stay the course, he says. “Doing for mining what Ghana has done for oil should be the future for managing the wealth from Africa’s vast natural resources.” 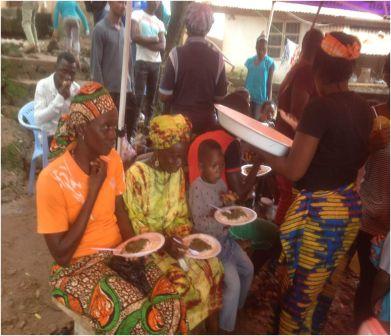