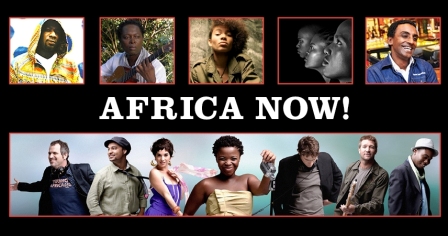 The two day weekend event, a co-presentation by World Music Institute and the Apollo Theater will run from Friday, March 15 – 16, 2013 at the legendary Apollo Soundstage in the Harlem section of Uptown, New York City.

“We are especially excited to present Africa Now as it represents the Apollo’s evolvement as a world class performing arts institution.  There has always been a wonderful history of African music on the Apollo stage from Hugh Maskela to Miriam Makeba and, even more recently, we’ve had concerts showcasing the icons of African music like Salif Keita and Tiken Jah Fakoly,” said Laura Greer, the Apollo’s Associate Producer.

A meet-the-artists panel discussion on Friday from 7:30 – 8:30 pm moderated by Esther Armah – host of WBAI, 99.5 FM in New York City – on how the different cultures of participating Africa Now artists influenced their respective music will precede the main event Saturday.

Expounding on Apollo’s impeccable reputation of presenting great African music Ms Greer added “Africa Now just takes that next step for us in honoring that history by giving artists like Blitz the Ambassador an outlet and an opportunity to reach a broader audience and through a partnership with such an important resource in the global community as World Music Institute.”

Hosted by celebrity chef Marcus Samuelsson, organizers say Africa Now is certainly a blowout concert you do not want to miss.

ABIBA Systems to participate in Ne...