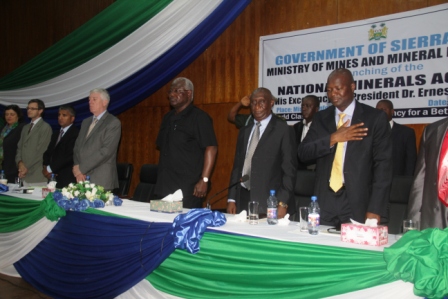 His Excellency Dr Ernest Bai Koroma has reiterated government’s determination to use the mineral resources of the country to continue to improve the standards of living and employment prospects for all Sierra Leoneans. “My administration is determined to make our mineral resources a strong force for good in Sierra Leone, playing a key role in lifting standards of living and employment prospects for all,” the president said. He made this declaration on the occasion of the launching of the National Minerals Agency (NMA) at Miatta Conference Center, Youyi Building, Brookfields, Freetown on Thursday 7th March 2013.  (Photo: His Excellency President Ernest Bai Koroma launches the National Minerals Agency)

President Koroma however noted that although his government inherited a poorly regulated mining industry, a major transformation of the management of the Minerals Sector has been undertaken by government in a number of ways, such as, revising the Mines & Minerals Act in 2009, which protects communities, corporate social responsibility, improved licence management with cadastre office; ensuring transparency in the sector by launching one of the world’s first online databases of licences and payment; implementing environmental and community protection in mining. He also noted that the University of Sierra Leone and African Minerals will be constructing a technical vocational institute in Tonkolili District to provide training and skills acquisition opportunities for the youths in the country.

The Chief Executive disclosed that the establishment of the NMA is to ensure transparency and sustainable development in the mining sector as well as maximize revenue and other benefits for all Sierra Leoneans.

“With this Agency we are sending a strong and positive signal to international investors that our beloved country is the ideal place to do business in the mining sector.  Investors can expect a speedy turnaround time for licence applications and a customer-friendly attitude from members of staff at the NMA.  We will also be developing our geological database of the country, ensuring that prospective investors will have, in time, up to date information on geological formations, which will greatly aid their exploration activities,” he confidently said.

“The key to the NMA’s stability is the ability of government to self-finance it. In the face of the current and temporary EITI suspension the launch of the NMA could not come at a more important time. It is our hope and belief that the NMA will be able to make the required contributions not only in achieving EITI compliance but by firming up the country’s steady march unto middle income status”, said Chris Gabelle of the World Bank Country Office in Sierra Leone.

The DFID country head, Dr Phil Evans described the day as historic for Sierra Leone, adding that the transparent and efficient management of Sierra Leone’s mineral wealth was crucial to the country’s future as well as pivotal to the success of the Agenda for Prosperity. He noted that establishing a National Minerals Agency was no easy task as it required determination, political will and a lot of first class technical work. Dr Evans paid glowing tribute to civil society, donors and especially the Adams Smith International for providing the necessary technical support to get things done. He pledged on behalf of DFID the sum of 1.1 Million British Pounds Sterling available immediately through their support to extractive industries technical assistance programme. He pledged more support for the mining sector as time goes on.

The GIZ Country Director, Mariam Mdailhi also described the launching ceremony as a milestone in the promotion of good governance of mineral resources in Sierra Leone. “It is a very strong demonstration of commitment by the government of Sierra Leone to maintaining law and order in the extractive industry”, she added.

Luthar Jaschloe of the European Union said the launch of the National Minerals Agency was a significant step towards regulating fair and competitive precious mineral trading, ensuring optimum revenues for Sierra Leone from its resources in responsible and sustainable way and providing also effective geological surveys. He also noted that the online mining cadastre repository which is the central feature of the agency will move the country towards the promotion of transparency, accountability and good governance in the extractive industry. “We are confident that this will translate into more and better investment and will help to ensure a more optimal, responsible and sustainable contribution to economic growth and overall national development. We’re proud that together we walked part of the way that led to the creation of the Agency,” the EU representative said.

According to the Chairman of the NMA Board of Directors, Mr. Moshe Roberts, a strategic development plan for the next five years has been conceived to compliment the president’s Agenda for Prosperity, and maintained that over 80% of those employed by the agency are youths.

The Minister of Finance and Economic Development, Dr Kaifala Marrah eloquently highlighted the reasons that led to Sierra Leone’s suspension from the EITI.

The ceremony was climaxed with the cutting of the tape as well as a conducted tour by President Koroma of the new office building of the NMA at Coal Farm, Wilkinson Road. The launching ceremony was chaired by the indomitable Minister of Mines and Mineral Resources, Alhaji Minkailu Mansaray.

This Week In: English Football – B...