New year, new CBF league launch. On Saturday 5th January, two thousand children from all forty-four boys teams gathered to take part in marches through the streets of their respective regions. Adorned in their team strips, they sung and danced their way towards the local football pitches waving CBF banners, drawing the attention of everybody in earshot.

Those who witnessed the marches and followed the boys to the fields were treated to a series of short speeches from local dignitaries and CBF staff. In Bo, crowds were treated to a performance from ’Joshua the Acrobat’, an U12 boy from Getwise United whose talent involved a series of contortionist poses that drew huge cheers from the spectators. Meanwhile, in Freetown, a local brass band accompanied the players’ onto the field of play.

With the ceremonies over, the games began and it was a fantastic opening round of games. In Makeni, U14 player Mohamed Mansaray of Sektars FC, wowed the crowds as he put three past Starman FC during a 5-0 victory. His feat would have been matched by John Kanu (Cowyard FC, U12) had he not seen the opposing goalkeeper on the floor injured as he approached. Rather than score the goal to complete his hat-trick, he decided to kick the ball out of play in order to allow the injured player to receive medical treatment. For this outstanding display of good sportsmanship, John earned a green card and fair play points for his team.

The entire day was a fantastic success across the country. In Kenema, around four hundred spectators gathered to see the opening round of matches. The fans in all regions were largely well behaved, with only one reported pitch-invasion in Bo when a mother ran on to the field during Little Skills and Shining Stars’ thrilling U14 game. She simply wanted to congratulate her son on scoring the equalising goal.

The CBF staff would like to extend a huge thank you to everybody involved in the league launches. We are in for a thrilling  season of youth football this year and it is all thanks to the hard work of the coaches, regional staff and of course, the boys themselves.

We are still seeking sponsors for clubs in the league. Visit the sponsor a club page to find out how you can get involved.

Moves to shut down illegal nursing... 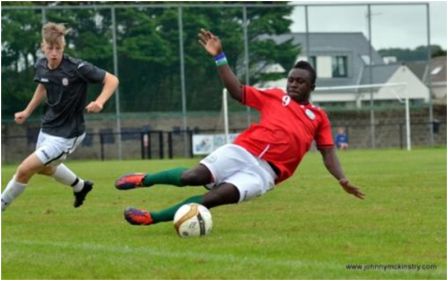