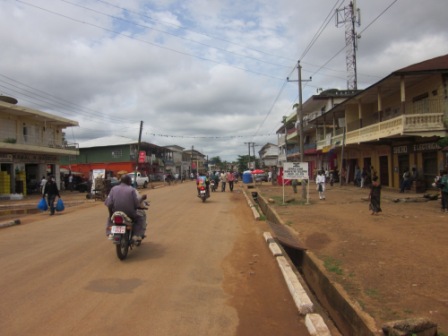 In partnership with the Ministry of Education, Science and Technology,  the Kenema District Council, has donated an assortment of science and sporting equipment to various secondary schools in the district.

The donated science equipment is meant to equip the science laboratories of the various schools so as to enhance the much-needed science education in Sierra Leone.

While handing over the items to the Saint Joseph Secondary School during an impressive ceremony on the school campus, the new Chairman of the Kenema District Council, Doctor Senesie Mansaray, who is a gynecologist, described science as the backbone of technological development and urged the school to make best use of the science equipment.

Doctor Mansaray noted that many schools have been teaching science in the abstract, a situation which, he said, has been contributing immensely to consecutive mass failure in the sciences in public exams. The Chairman frowned at the alarming rate of teenage pregnancy in schools. A situation which he said has been severely undermining girl child education in the country. He disclosed his intention to develop a bye-law to handle the ugly situation.

Responding to the good gesture, the Principal of the Junior School, Mrs. Millicent Samba, extended big thanks to the Kenema District Council for the donation and pledged that the equipment will be utilized in the best interest of the pupils.

The changing face of Vimetco in Si...