Homepages
Your trusted place for Sierra Leone and global news
Trending News
HomeNationalIMC: A Step in the Right Direction 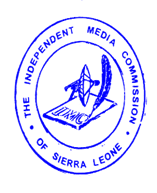 The Independent Media Commission on Monday 24th September launched a three year strategic plan that will span from 2013-2015 and a comprehensive map showing locations of various media houses in the country.

In his welcome address, the Chairman of the Independent Media Commission, Mr. Rod Mac-Johnson said the commission was particularly happy because of the turnout of people from various walks of life.

He said he is pleased with the launching of the IMC Strategic Programme and Organization Plan which will provide clarity, focus and priority for the next three years.

He explained that as the Multi-tier elections draw near, the commission is keenly aware that international observers, the National Electoral Commission (NEC), development partners, and donors will need to have basic data on the number of functional media institutions and their specific locations in the country.

“This is the first investment the commission has undertaken on maps and for very good reasons.  With the exact information of location down to geographic positioning site bearings provide an invaluable source of information for several people who would want to know where certain newspapers, radio stations, and television stations are located in the country,” he said

According to Rod Mac Johnson, two consistent undermining factors in the national development are the absence of proper strategic planning and the culture of maintenance.

“All of us are strategists in one way or the other. We live in an environment that is constantly changing and so we do not plan or act in a vacuum and so the plan we are launching will provide a roadmap on where we wish to go and how, it will provide donors and other development partners that wished to work with us a sense of how we view ourselves and what we deemed as strategic in the next three years,” he said.

Commissioner Augustine Garmoh educated his audience that the data and information being shared is 6 Global Positioning System (GPS) and Geographic Information System (GIS) media maps that were generated and developed through a consultancy funded by the United Nation Development Programme (UNDP).  He said the study was undertaken by World Geodetic Systems Group of Experts.

He disclosed that among the six maps, the first map shows twenty-eight functional Radio Stations and 6 other TV and repeater stations. The second map shows radio broadcasting station of the fourteen stations in the Northern Region.  Map three shows Freetown City map of Western Area Newspapers and there are total of 58 newspaper locations

He explained that the exercise was done in three phases of which phase one was based on the geographic positioning systems field survey that led to the recording of precise coordinates of the media institutions in the Western Area, Northern, eastern and southern Regions.  And phase two was to generate geographic information systems-based maps of these regions, showing their locations in Sierra Leone, and phase three was to provide amap of Freetown Streets and overlay media house positions onto the map.

“These maps are being sold as part of the commission’s sustainability strategy and very little had been added to the cost price and so we are encouraging you all to buy these maps.  Journalists in particular should buy these maps because it indicates clearly where their competitors  are and how to relocate media houses in Sierra Leone,” the commissioner noted.

Formally launching the Strategic Plan on behalf of the Minister of Information and Communication, he advised Media houses, MDAs, and NGOs to take advantage of the maps as it will guide them in locating the various media institutions across the country.