Ibrahim Bunduka, a Sierra Leonean professional footballer who plies his trade in Cyprus playing for first tier club, Alke FC has donated football items worth millions of Leones to the executive of the Kamboi Eagles Football Club in Kenema, eastern Sierra Leone on Sunday May 27.

Handing over  the equipment, Ibrahim said Kenema was his home and that his father, Alusine Bunduka use to serve as the longest serving captain of the Kamboi Eagles Football Club who the fans still regard as an icon legend in the club.

On behalf of Kamboi Eagles Executive, the Technical Adviser, Alie EL Alie thanked Ibrahim for his timely gesture offered to the clubs his father had serve for a length of period as he was showered with praises.

Some of the high profile names who played on the side of Ibrahim Bunduka include Ayo King, Desmond Wellington, Mohamed Fornah, Alimu System Koroma, Man of God, Francis Zappa Koroma and others.

Ibrahim Bunduka told Sierra Express Media Sports that he is willing and ready to play for the national side, Leone Stars if called upon to render his services.

The 21 year old lanky player plays as a left back and is versatile up front in the wing. He’s got good athletic prowess and is good at set-pieces. 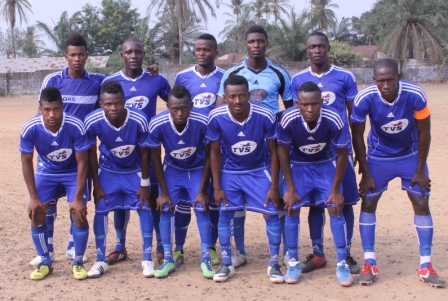 Kamboi Eagles will not relegate –...