The Amputee’s Welfare Association in Kenema has registered dismay over the actions of the authorities over what they refer to as neglect on their welfare and activities. This was made in a statement by the chairman of the amputees Mr. Solomon Cooper on Wednesday 11th November 2009 at a well attended ceremony marking the celebration of World Disabled Day at the Holy Trinity Hall in Kenema.

Cooper said they feel neglected by authorities probably because of their status, and blamed the Ministry of Social Welfare Gender and Children’s Affairs, UNICEF, Paramount Chiefs and the Mayor of Kenema City.

The main trust of the amputee chairman’s displeasure was the failure of these groups and local authorities to attend the amputee’s commemoration ceremony, though he said, invitations were sent to them a week ahead of the day.

According to Mr. Cooper the Kenema authorities pay more attention to celebrations like World Aids Day, World Malaria Day among others, because such days deal with able people and above all because they get direct benefit from those activities. He said with all the difficulties and frustrations the amputees and war wounded have opted to become ambassadors of peace with the theme of this year’s celebration “Nothing About Us Without Us” He however extended thanks and appreciations to the Network Movement for Justice and Development, Global Rescue Mission, WFP, GTZ and the Norwegian Friends of Sierra Leone for their support in diverse ways to ensure that their status are cared for in the district, adding that in the recent past, thirty houses were built by the Norwegian Friends of Sierra Leone for amputees and war wounded and that other twenty are presently under construction in the district.

He underscored that the issue of Health, Water, and Electricity. Â Education is a major challenge in the newly integrated community programme for the amputees. Mr. Cooper also called on government and other donor agencies for support in improving the lives of the physically challenged in the district.

Vice Chairman of the Amputee’s Welfare Association Mr. Mohamed Kallon noted that disability is not a crime but attributed it to the will God which man has no control over. He said they have accepted their status for according to him they have no option. Mr. Kallon called on members of the association to be prepared to pay their taxes with effect from the new year, for reasons he said they as physically challenged persons have many needs for which they rely on government for support for and must therefore be seen to compliment government efforts in that regard.

Chairman of the Sierra Leone Association of the Blind, Kenema district branch Mr. Nabie Sowa in his contribution said that over the years blind victims have been totally left out in terms of educating people on HIV/Aids transmission prevention and treatment simply because of their status as blind people.

He further said that though they are blind, they are as vulnerable to the disease as they likewise engaged in unsafe sexual activities. He therefore called on stakeholders in the fight against the pandemic for inclusion in future education and sensitization programmes for the blind on HIV/Aids. 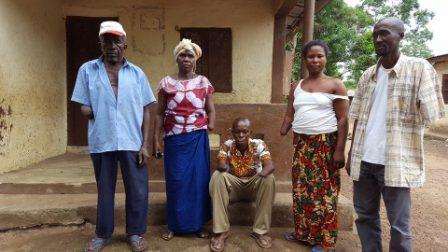