A grant of approximately US$42.1million from African Development Fund (ADF) and a loan of US$19 million from OPEC Fund for International Development (OFID) – totaling US$ 61.1million have been provided to improve access to adequate water and sanitation services.  (Photo: Minister of Energy and Water Resources, Professor Ogulande Davidson )

Three Towns Water & Sanitation project initiated by the project implementation unit of the Ministry of Energy and Water Resources has been officially launched at the Miatta Conference Hall Youyi Building Monday 18th July.

The Resident Representative of the African Development Bank (ADB), Samuel Ofori Onwona, in his statement said ADB’s conditionality on the project is good and bad.

That the good speaks of rehabilitation of existing facilities and the bad involves the misuse of US$ 61.1 million provided as grant for the said project.

He called for the independence of SALWACO’s functions on towards the project and encourages stakeholders to have a water reserve system in case of difficulties or shortages in the future.

He explained that the Government of Sierra Leone has already provided about Le 1 million as counter funding for payment of compensation to project affected persons and other project costs which demonstrate commitment towards the successful implementation of the project.

He said the objective of the project is to improve the access to adequate safe and reliable water supply and public sanitation services for the three cities and to also enhance the institutional operational and management capabilities of the Sierra Leone Water Company as the main service provider.

Dr Davis also said that the project will increase national coverage of water from 33% to 75% percent and sanitation from 33% to 39% with the view to improve access to adequate safe and reliable water supply system for the three cities.

He noted that 200 community members both male and female will be trained in hygiene and sanitation for effective management of the facilities thereby ensuring sustenance of the project.

The Minister of Energy and Water Resources, Professor Ogulande Davidson thanked the donors and other partners for supporting them in the improvement of water and sanitation in the country.

He stated that water and electricity will be put in place to ensure payments for effective management of revenues generated in the company.

He added that electricity and water is a good business that generates income.

He went on further to state that plans are underway for finalizing the water bill in a bid to formalize water management across the country.

He added that SALWACO is only operational in six towns and expressed the need for the establishment of provincial water company as soon as possible.

That in Magburuka, Portloko, Lunsar, Rokupr, Kambia, Mile 91 and Yele there is progress in the provision of safe water while Moyamba, Pujehun and Kailahun water projects are ongoing.

In his keynote address, the Minister of Information and Communication, Ibrahim Ben Kargbo said the water and sanitation project is part of Government’s Agenda of Change, pointing out that the project is also a boost to institutional sanitation.

He noted that the provision of the facilities is in continuation of a nationwide water and sanitation programme in which smaller communities will also benefit and, that funding option for Segbwema and Mattru Jong is also underway.

The Mayors of the three cities similarly expressed thanks and appreciations to the donors. They said that water and sanitation project is one of the major projects initiated by local councils and assured that, their people will take part till the end of the four years implementation completes.

The Acting General Manager of SALWACO, Mr. Victor Hastings-Spain in his exact words said “today is a red letter day in the history of SALWACO. After looking forward for so long in providing water and sanitation for three cities and other parts of the country, it has finally come to reality.”

He commended the donors and the Government for their supports and assured them that the project will end successful as stated in the terms and agreements.

The launching was ended by the commencement of four days workshop for donors and stakeholders on the implementation of the project.

Police have done nothing regarding... 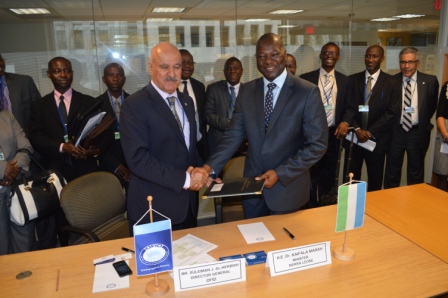 US$ 10 Million for Matotoka-Sefadu Road