Fighting Corruption: another way to fight poverty and Ebola

Fighting Corruption: another way to fight poverty and Ebola

The simple message from Transparency International (TI) to world leaders gathered at the United Nations to discuss the future of the world’s development last year was: “You need to fight corruption to win the battle against poverty.” According to the anti-graft watchdog, the governance issues of providing basic social amenities like health centres, schools, pipe-borne water and good roads can hardly be achieved without a robust fight against corruption. In other words it is no longer a secret that a robust fight against corruption is synonymous with a fight to end poverty and diseases. Many studies have proved this.

The British Prime Minister (PM) David Cameron while addressing the United Nations Security Council during the 69th UN General Assembly in New York on September 24th 2014, stressed the need for world leaders to put more efforts in the fight against corruption in order to end poverty. For the British PM, the more corrupt a society, the poorer its people. In drawing a link between corruption and poverty, Mr. Cameron makes reference to situations in which aid does not get through to the intended beneficiaries; and countries with massive mineral wealth but with a large number of citizens in miserable conditions. “So don’t let anyone keep corruption out of how we tackle poverty,” he remarked.

In Sierra Leone we have seen instances in which selfish and greedy individuals squander state resources at the detriment of the general populace. But with gratitude to the country’s strong anti-corruption legislation and the robust fight by the country’s anti-graft agency, we have seen such individuals face the wrath of the law. In the past five years, this has enabled the State to recover billions of Leones from corrupt offenders.

As many people have observed, the outbreak of the deadly Ebola virus in the country this year exposed the severe weaknesses of our health sector. I want to believe most of these weaknesses are corruption-related. We sometimes accuse successive governments of not doing much for the health sector. But what we cannot deny is the fact that successive governments have always made the health sector a priority when it comes to budget/resource allocations. This explains the fact that some of the problems that have surfaced in the health sector during this Ebola scourge should be non-existent had such resources been judiciously utilized over the years.

The most troubling news is that in the midst of the vigilance being shown by the Anti-Corruption Commission (ACC) and its partners in ensuring that funds and resources meant for responding to the Ebola outbreak are not misappropriated, certain individuals still think it should be business as usual. Listening to phone-in programmes on radio and television stations we still hear of reports of inadequate response to suspected Ebola cases, complaints about lack of protective gears and the plights of people in quarantined communities.

Quite recently the ACC and the Sierra Leone Police intercepted two vehicles loaded with rice for Ebola quarantined homes in Makeni. The matter is being investigated by the ACC and the police as an alleged act of theft and corruption. The arrest came less than a month after the ACC’s press statement on the Ebola. In the press statement, the Commission acknowledged “the response of government, local and international NGOs, civil society, international partners and other stakeholders in combating this scourge.” The Commission however warned “all those engaged in the receipt and utilisation of Ebola funds to be mindful of the provisions of the Budget and Accountability Act of 2006 and the Anti-Corruption Act of 2008 dealing with Mismanagement and Misappropriation of Public and Donor Funds.” The ACC is aware that such warnings will not sufficiently deter the unscrupulous acts of certain individuals, but more will be done to ensure the practice is totally discouraged.

Theft of Ebola resources is unfortunate to say the least. When the disease broke out the government has painstakingly been mobilizing resources to help in the fight against an outbreak which devastation is already being compared with our decade-long civil war. It is also unfortunate because such acts could hinder donor and local support in the fight against the disease.

Finally, I will end by reiterating the point that we cannot end poverty if resources that are meant for enhancing the well-being of the people are squandered. We cannot end poverty if public officials continue to extort monies from the poor. We cannot adequately combat the Ebola outbreak if the resources meant to respond to the disease are being misappropriated. . As the ACC Commissioner Joseph Fitzgerald Kamara always brilliantly puts it the same people who squander public funds are the ones who take pride in building mansions and showing off affluence in poverty-stricken communities. This is why all well-meaning Sierra Leoneans must help the ACC and the government by reporting all acts of corruption to the Commission. We can only succeed in waging a war against corrupt individuals if every member of the public sees it as a national duty to join the Commission in the fight against corruption. I will also join the British PM by stating that a successful battle against graft will correspondingly mean an improvement in the well-being of the citizenry. 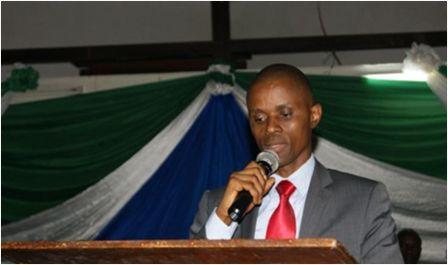