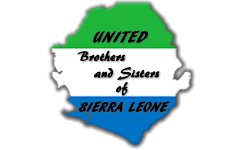 Welcoming guests to the programme, Mrs Angelous Kadija Thomas, started by thanking UBSSL and Carl’s Junior Restaurant for their relentless effort in supporting university and school going children in Sierra Leone.  She further encouraged the awardees to take their academic work seriously.

In her remarks Chairlady of the programme and a Radio Broadcaster, Alphina Williams started by encouraging the recipients of the scholarships to take it seriously and cautioned the parents to use the money awarded to their children for the intended purpose.  She noted that the money is useful to the awardees taking into consideration the economic situation in the country.  She further thanked UBSSL and Carl’s Junior for their support.

In her statement, the Liaison Officer and Honorary Member of the United Brothers and Sisters of Sierra Leone , Hawanatu Bockari started by welcoming all and sundry to the programme.  She added that the event is a double one as they would be distributing lap tops to deserving university students and two secondary schools.  She further extended thanks and appreciation to fellow UBSSL members for appointing her as a Honorary Member.  Miss Bockari stated that she felt honored for the confidence and trust bestowed on her.  She further thanked all UBSSL members in California, USA for their tremendous support, especially Carl’s Junior Restaurant.  She went on to congratulate all deserving awardees who made it in their exams last academic year and encouraged them to continue the good work.  The Liaison Officer informed her audience that they are still awaiting the results of three university students from IPAM and Njala University College.

From the speech of the President of the United Brothers and Sisters in Sierra Leone (UBSSL) in California, USA , Mr Abdul Kassim, Miss Bockari started by welcoming the guests  on behalf of the President.  Mr Abdul Kassim thanked the Liaison Officer based in Sierra Leone for her time and effort in planning the award ceremony.  He further thanked all UBSSL members for their valuable contributions in the development of UBSSL, and also thanked all UBSSL guests in California for their continued support.

The President pointed out that in 2013, UBSSL awarded 29 scholarships to Sierra Leone (Freetown and Bo) in the amount of $4,770 which is equivalent to Le20,486,000.  He stated that all but two of the scholarships has been renewed this year, adding that UBSSL withdrew the benefits of two students from Bo town who did not gain promotion in the last academic year.  Mr Abdul Kassim highlighted that the secondary school students will each receive $100, the university students, $300 and a lap top computer each and one primary school pupil will receive 50.  Mr Kassim stated in his speech that ten lap tops should be distributed to the Sierra Leone Grammer School and the St Joseph Secondary School, Blama each for the use of the students.  He stated that their short term and medium term goals remained the same focusing on Sierra Leone in assisting Sierra Leone in their own small way.  He further said that their medium term objectives is still focused on technology access for students, noting that last year, ten mini lap tops were donated to IPAM university of Sierra Leone.  Mr Kassim expressed appreciation to Carl’s Junior Restaurant for donating all the laptops and for their valuable contribution in education in Sierra Leone.

The President of UBSSL, Mr Abdul Kassim concluded by congratulating the recipients and reminded them that they are the future leaders of Sierra Leone, stating that they are all aware that it is not easy in present day Sierra Leone and further encouraged the students to keep on the good work as according to him, the pen is mightier than the sword.

The Representative of Sierra Leone Grammer School, Hassan Dumbuya and the Principal of St Joseph Blama Secondary School Michael Samba, both thanked UBSSL and Carl’s Junior Restaurant for the donation and assured them that the laptops will be used for the intended purpose.  A recipient of Fourah Bay College University of Sierra Leone, Jamestina Blake thanked parents, fellow recipients and UBSSL for helping them in their education.  She stated that they appreciated the scholarship awarded to them as that is aspiring them to continue to work very hard.  Jamestina Blake appreciated the laptops donated to them as it will be very useful to them in their work.

Abdul Manor Kamara, a recipient of Bishop Johnson Memorial School, and Ajibo Conteh of the Sierra Leone Grammar School made meaningful contributions, while Brima Kamara, the primary school boy, gave the vote of thanks.

Relaunch of the trusted and popula...