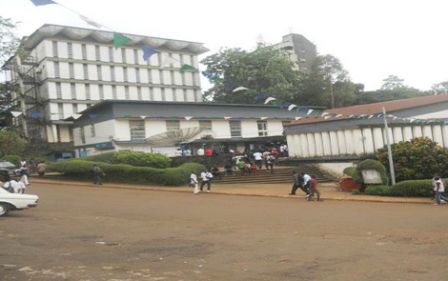 A total of 519 students pursuing various courses including Nursing, Pharmacy and Medicine have been enrolled at the College of Medicine and Allied Health Sciences (COMAHS), University of Sierra Leone.

Speaking at the matriculation ceremony which attracted distinguished personalities including the Pro-Chancellor and Chairman of Court, Vice Chancellor and Principal, University of Sierra Leone and other university officials including Deans of Faculties, parents and guardians, the Acting Provost of COMAHS Lieutenant Colonel Dr. Foday Sahr, on behalf of the college administration and staff, welcomed the new batch of students.

He called on them to demonstrate the highest standards of excellence and strive to exhibit the values of the hard work and commitment of those who have gone through the college before them.

“Your maintenance of such standards should not only be restricted to the university or university life. You would do well to uphold, maintain and sustain such excellence in the service you render to your nation,” he stressed, while urging them to concentrate not only on what they can get but also on what they can give back to the nation.

He admonished the students to exhibit the best behaviour during their stay in the college, noting that even though they are free to socialize with their colleagues their primary concern should always be to work hard to get their degrees, diplomas and certificates.

He congratulated the members of the academic staff for their excellent work over the years and implored them to continue to uphold the standards not only in Sierra Leone but out of Sierra Leone.

He also congratulated the new University Marshall, Mr. Clifford R. Roberts, a member of staff, who he said was promoted as a result of his hard work over the years in the college.

In his comments, the Acting Vice Chancellor and Principal, Professor Jonas A. S. Redwood-Sawyerr, said over the years COMAHS has set enviable standards in the training of medical practitioners while it has gained international recognition both in its practice and in the pursuit of postgraduate or specialist programmes by its graduates. He said these achievements were as a result of strategic planning and hard work of the dedicated staff and committed students over the years. He urged the staff and students to continue the good job.

The Pro-Vice Chancellor and Chairman of the University Court, Rev. Dr. Modupeh Pearce also implored to work hard and bring pride to themselves, their families and country.