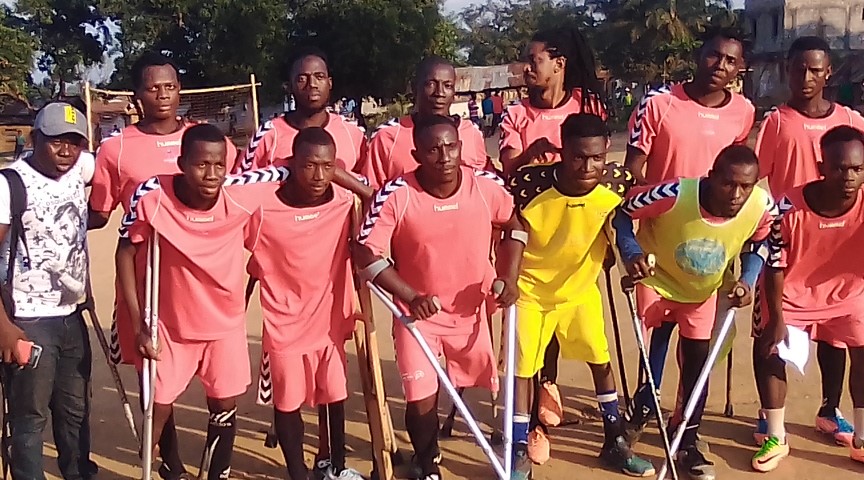 Speaking to this medium in an exclusive interview, the Chief Executive Officer (CEO), who doubles as the Technical Manager of the Sierra Leone Polio Football Team, Mohamed Lamin Koroma aka Coach Vidal, said that WDD is a memorable day to raise awareness on burning issues affecting disable people across the world.

Coach Vidal said, prior to the WDD commemoration, the entire polio camp was in mourning mood for the sad departure of their goal keeper, Mohamed Jalloh who he described as a utility player. He called on the entire team to observe a one minute silent prayers from both faiths as a sign of paying divine respect to the late goal keeper during a tribute match between Sierra Stars vs Leone FC .

Mr. Koroma reiterated that, the loss of their goal keeper was an unfortunate incident especially at a time he was needed the most, adding that the Sierra Leone Polio Team decided to form the two teams in a bid to mark his 7th day ceremony on 3rd December which happens to be WDD.

He said even though the Ministry of Sport and other Sport Governing Bodies have not recognized Polio FC, but he has been managing both amputee players and Cerebellum Passive (CP) players with various level and vowed to continue nurturing young flocks especially for disables people and prostitutes.

Manager Vidal added that if not for the divine intervention of God Almighty, he would have not reached this level, with a disable football club that has no approved structures but with the support of few International and Local Non Governmental Organizations, he said he has produced few talented and outstanding amputee players for the National Polio Team in the just concluded Africa Amputee Tournament in Angola, 2019.

He however expressed sincere appreciations to WARD C Chairman, Kashor Holland Joseph Cole and other international partners for their unflinching support towards the improvement of the team.

He appealed to Persons with Disability Commission to incorporate the Sierra Leone Polio Football Club into their strategic plans for 2019 to 2020.

In his good will message, Sam Pessima who happens to be man of the match during the ceremonial game said, the WDD commemoration was set aside to advocate on their behalf, citing that the death of colleague teammate was shocking and mysterious which is why they decided to organized the match to pay homage.