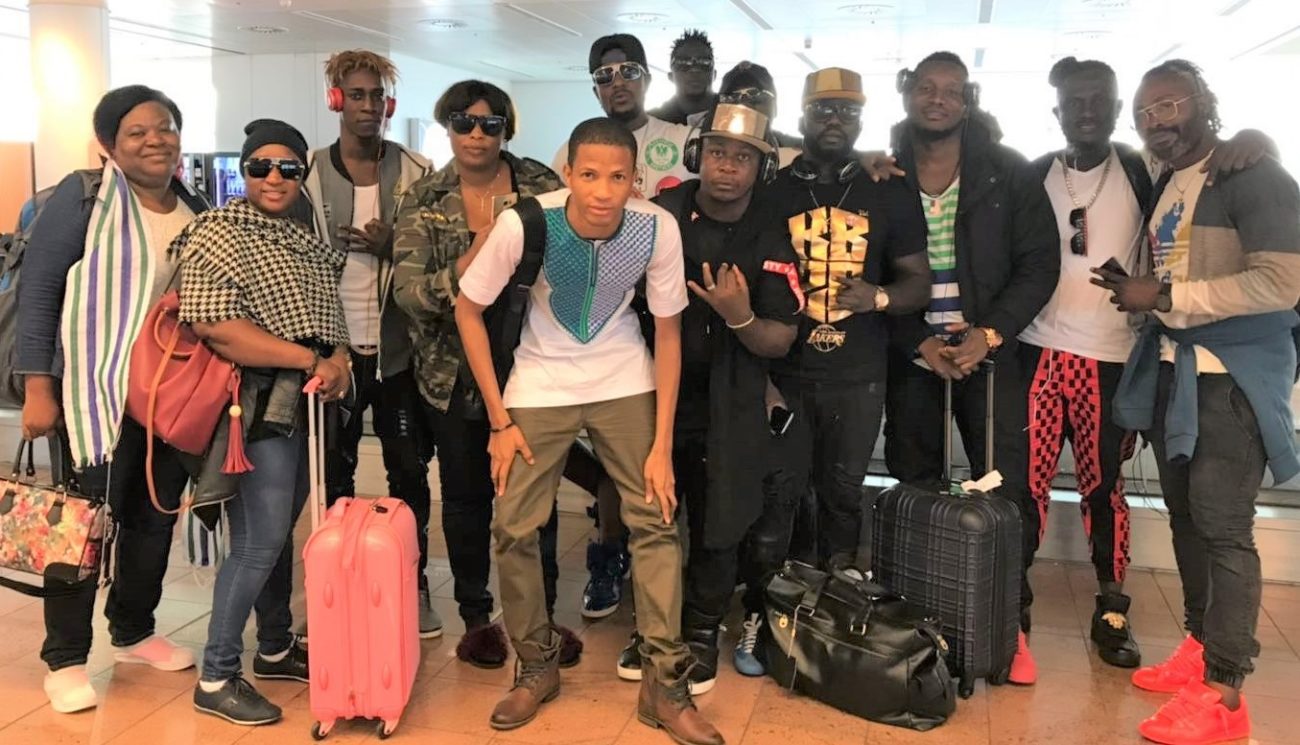 After a Successful Musical Tour in the USA…

Twenty-Six (26) Sierra Leonean Top Entertainers, who left the shores of Sierra Leone on the 22nd, of October 2017 for the Peace, Love and Unity Concert and the Sierra Leone Festivals in the United States headed by Ms. Dorine Poawui, have returned home safely on Sunday, December 3rd, 2017 after a successful Musical Festival. The organizers of these events held a meet and greet event for fans to meet their favorite Entertainers in Maryland on October 28th, which had a great impact on raising the momentum for the main event ahead. This day was also used to celebrate the birthday for the ALL STARS President Milton Koker aka Colabo; he man with great leadership and charisma. On this first trip to the United States, The CEO of Peace, Love and Unity Concert and the Sierra Leone Festivals in the United States Ms. Dorine Poawui Hosted the entertainers at the Hilton and Marriot Hotel in Greenbelt, Maryland and rented a House in Ellicott City, Maryland for lodging upon their arrival on October 23rd, 2017.

With the help of some of the best promoters that Sierra Leone has to offer in the United States and Home In Sierra Leone and the advertising power of American TV from TV networks like: MTV, BET, MSMBC, TVI, VHI, the weather channel, HLN, NBC sport, CNBC, OWNS Network, DIY channel among others, also sent waves across the country in letting their audience know that they will be coming to a venue near them soon enough. The main event happened on Saturday, November 4th, 2017 in Washington DC at the Karma Hall which attracted Masters of ceremony, Disk Jockeys [DJ’s] organizers and representatives from the Ministries of Youth Affairs, Tourism and Cultural Affairs from Sierra Leone, along with other lined institutions and thousands of fans who cheered up the artists as they performed their hit songs. The Peace Love and Unity Concert CEO, Ms. Dorine Poawui will like to express special thanks to the Sierra Leonean Minister of Youth Affairs, Minister of Foreign Affairs, Minister of Tourism and cultural Affairs, Members of Embassy and Ambassador at the time of this event, the American Embassy and immigration for seeing the Sierra Leone musicians as credible ambassadors representing their country. Both Sierra Leonean artists based in the US, London and in Sierra Leone for making this tour a success and also for being law abiding people.  All promoters involved, thank you, because without you our events will not be as jammed pack as it was, I love and respect you all, please lets continue to make history together for Sierra Leone entertainment, All Dj’s involved, you are truly appreciated, last but not least I Ms. Poawui will like to give special thanks and appreciation to my team and all involved in making this event possible and successful. “I cannot do this alone and I did not do it alone, God has bless me with people like you that truly understand the nature of entertainment and the stresses it carries day in and day out, once again thank you” says Ms. Poawui. Visit to the Sierra Leone Embassy in USA

Women are Still Subjected to Men A...