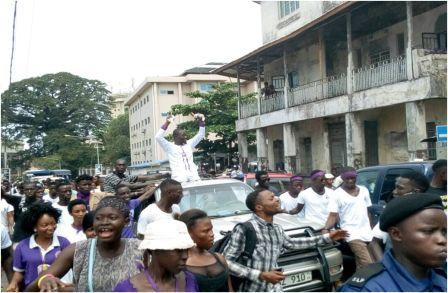 The former Presidential flagbearer aspirant for the United Democratic Party (UDM), Pastor Yunku Kanu has expressed intention to hold a flamboyant and colorful declaration to join another political party by next week.

Speaking to Journalists yesterday at a press conference in Freetown, the former UDM National Executive Chaplain said the party which he is going to join with his entire 159 support groups across the country will definitely win the March 7th 2018 general elections.

He stated that his defection to his new party will create mass exodus from UDM because according to him there is nothing to write home about in the UDM for the fact that he said, there are people that has no respect for the party’s constitution.

He told Journalists that he has tendered his official resignation to the UDM executive since January 5th 2018 adding that the UDM refused to organized primaries because they know that he has the majority support.

When asked about the party he is going to join?, Mr. Yunku refused to name any but emphasized that he has friends in all the four leading political parties in the country including the APC, SLPP, C4C and NGC.

He stated that after through consultation across the five political regions and listened to advise from friends, supporters and relatives, the new party he is about to join scored 75% and further described his former party as a club because it is run by few self centered people with much tribal differences.

He said he joined the political landscape to influence change among selfish politicians that have taken the country backward and spoke on the importance to place corrupt free people in positions of trust adding that politicians should be very passionate about the welfare of the people and the country’s development as a whole.

He said nobody gives him money or promised to give him position but he democratically resigned and maintained that it is disgraceful for the UDM to have only 2 Parliamentary candidates and almost no Councilor candidate for the whole country.

He said such lapses demonstrated that the set of men who have taken over the party are not the right people to share our national cake and pointed that he wanted to belong in a system that has value and respect for the grassroots people that put them in their positions of trust.

He said he is admiring the new party he is going to join for inclusiveness and their quest to empower young people and vowed that he never associated himself with any other political party in his life except the United Democratic Movement and called on Sierra Leoneans to continue exhibiting political tolerance for peaceful, free, fair, transparent and credible elections.

Obasanjo distances himself from th...