‘Hon. Amadu Kanu is our choice in Constituency 086’ Constituents say 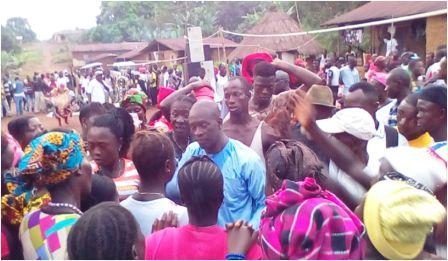 ‘Hon. Amadu Kanu is our choice in Constituency 086’ Constituents say

For better quality representation the sustenance of unity in the communities, the All Peoples Congress (APC) Member of Parliament for Constituency 086 in the Bumpe and Ribbi Chiefdoms in the Moyamba District, Hon. Amadu Kanu was on Wednesday, 22nd November 2017, at Mafulumu village, in the Ribbi Chiefdom, endorsed by the people of the Constituency during a “Thank you” exercise.

As part of the exercise he donated the sum of seven million Leones for the removal of the ferry that was sunk at the Mabang Bridge and one hundred bags of cement for the ongoing construction of the village school and Mosque with transportation as well as support towards the youths and women organisations.

He also thanked President Ernest Bai Koroma for the support he has received from him these past five years.

He called on his people to garner support and vote massively for Dr. Samura Kamara and his running mate Hon. Chernor Ramadan Maju Bah on 7 March 2018.

He noted that aspirants including those coming from abroad who want to contest for Member of Parliament in the Constituency should be encouraged to engage in the politics of the constituency.

He thanked the constituents for having supported him during his tenure. His also thanked his opponents who, he said, have made him to realize his mistakes and work harder. He pointed out some of his good works and legacy by providing two tractors, as well as forty thousand bushels of rice seedings, the construction of the community bridge, the provision of scholarships to children, support feeding to Muslims during the Ramadan month, purchasing of motor bikes to complement the fight against the Ebola epidemic, the provision of ten bundles of C.I. Sheets for the rehabilitation of the community center, transportation for school children, the construction of a hospital at Mabompeh, the construction of the Ernest Bai Koroma Agricultural Secondary School at Masimbara Junction in Bompeh chiefdom and paying of Teachers allowances including free learning materials, among several others.

In their contributions several people from various nearby villages including the Constituency Chairman for the APC, Mr. Saidu Margai Conteh and the Chair Lady, Mrs. Fatmata Kamara, Madam Rosaline Kona Kargbo, expressed their thanks and appreciation to His Excellency the President Dr. Ernest Bai Koroma for giving them Hon. Amadu Kanu as a servant who, they say, has served them very well.

Pa Umaru Kamara, the former Court Chairman who is the Town Chief of Mafulumu, said he was the happiest man to have had a man like Hon. Amadu Kanu to represent them in Parliament.

He said he was very disappointed with the detractors of Hon. Kanu, but stressed that they will return him to Parliament on 7 March, 2018.