SUN Secretariat takes the National Nutrition Fair to the South 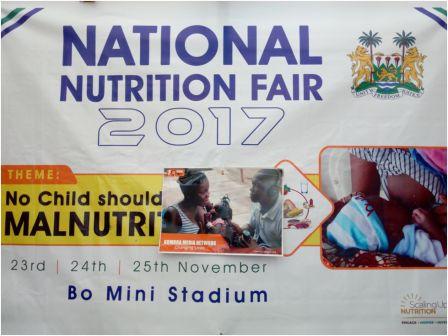 SUN Secretariat takes the National Nutrition Fair to the South

Scaling Up Nutrition (SUN) attached to the Office of the Vice President organized a three days National Nutrition Fair in the Southern part of the Country, at the Mini Stadium in the Bo City that took place on the 23rd, 24th and 25th November, 2017; in collaboration with Civil Society Organizations (CSOs), Focus 1000 supported by its Kombra Network and other development Partners of the Secretariat, on the Theme: ‘No child should die of malnutrition.’

Giving an overview of the program, the Director of SUN Secretariat Dr. Mohamed Foe said since Sierra Leone became part of the Global Scaling up Nutrition movement, considerable efforts have been made to meet the challenges of Malnutrition to secure Food and Nutrition Security. Malnutrition which according to him Nutrition Security is caused by multiple gaps and has become Global developmental issues, for which the movement inspires a new way of collaboration against all forms of malnutrition, led by government and multiple stakeholders, with a strong political with special reference to the Women and Children to improve their health system in particular.

Dr. Mohamed Foe went further to say that the programme do highlights national interventions to end hunger and malnutrition, and by so doing promotes good Infant and Young Child Feeding practices of positive health seeking behaviors.

Present for the official opening of the programme was the Paramount Chief of Kakua Chiefdom, P.C Prince Lappia Boima IV in his official statement said that the programme is a call to action, wherein the exhibition of foods simply showcases the securing the health of the nation. That the Government should it as exhibited so it should be in practice and must be sustainable and the public must be motivated to let it be especially in the best interest of the Women and Children.

Irish Aid advisor, Lawrence Michaels, commended Sierra Leone for its integrated efforts in meeting the Global SUN movement objectives, noting that they also support farmers in the areas of key micro-nutrients for pregnant women in particular and called on all for a renewed effort in this direction.

U N representative Hajaratu Khazali in giving her statement said malnutrition has had adverse effects on the mental output of Children, noting that reports reveal that 31% of the Children suffer from malnutrition in the Country, which is a cause for alarm. MAFFS representative Mohamed Ajuba Sheriff said they are committed to food security and therefore, Sierra Leone must go beyond backyard gardening to eat more of the food they grow to match up with other developing Countries.

The CEO of Focus 1000 and chairman-CSO platform for SUN, Alhaji Mohamed Bailor Jalloh said his organization as their key concern Focus on the 1000 days of the child from conception to 2 years, which he said is the foundation of Human life. He said they work with Islag and Christag as strong pillars due to their large constituents and command over their congregation, including the Traditional Healers, Market Women, CSOs and the Media known as Kombra Media Network as key groups to help build a healthy Children and Women for a healthy nation. With this they massively embark on Community engagements as his Organization has branch Office inclusive the KOMBRA NETWORK visible Countrywide

Present for the occasion was the Deputy Minister 1, Ministry of Agriculture and Food Security Hon. Marie Jalloh on behalf of the Hon. Vice president Victor Bockarie Foh. In her keynote address encouraged Sierra Leoneans to acquire all the six (6) Nutrients for a well-balanced diet, wherein be able to provide enough glycogen to accelerate positive thinking. She also said that Sierra Leone became member of the SUN movement in 2012 as a result of under malnutrition against which background the secretariat was established in 2013. She said the Secretariat do exist to promote the growth and health of children collectively and in line with the accelerated reduction of maternal health and child death in the Country.

An inspection tour of booths, skit presentation and cultural presentations were the high points, while the programme was chaired by Joseph M. Bindi the District Council Chairman on the official day opening of the programme.

It was a well-organized programme for a start by the SUN Secretariat with its Partners out of the Capital City into the Provincial Area of the Country. The cooperation was massive by other Institutions met on the ground as a Region though few challenges came like the location was good but the distance off the main Town, transportation and the time duration to still get people around. But this has been taken note of according to one of the Organizers of the Organizing Committee Salieu Sesay, Staff of FOCUS 1000. There were Schools competitions, live media coverage backed by Simulcast by KMN of FOCUS 1000, brief introduction by Organizations of their roles and responsibilities accompanied by performances, cultural performances championed by the Traditional Healers climax the occasion.