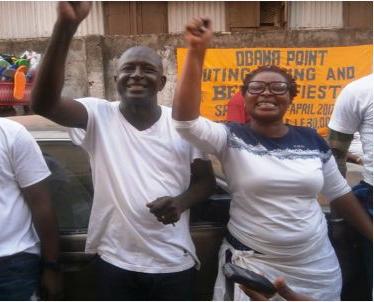 A philanthropist, business entrepreneur and staff of Electricity Distribution and Supply Authority (EDSA), Frank Abula Samura aka Obama has expressed confident that he is preparing with the unflinching support bestowed on him by ward members to clinch Ward 430 council symbol to contest the 2018 election.  (Photo: Honorable Francis Kowa, Obama and Chairlady Kanneh Sesay celebrating together)

Speaking to a cross section of Journalists at his Obama Entertainment Complex, Brookfields in Freetown said he developed intention to contest for the said council seat as a means of responding to several calls by stakeholders and young people to show up in the race as a potential and experienced politician.

Obama spoke on the role he has being playing to bring together and unite young people through Football and other youthful activities such as the regular cleaning of the entire vicinity and he mentioned his scholarship scheme which he said, has rescued many children who are now attending full time schools, feel inclusive and important among their colleagues.

“I contributed immensely in the rehabilitation project of one of the feeder roads within the ward”, said Obama and discussed that Frank Abula Samura is a household name in the All Peoples Congress (APC) party, Ward 430 and Constituency 125 as a result of his interactive approaches.

“I will be in position to mobilize grassroots support for the APC to win in my area of command if given the symbol”, he whispered Journalists and highlighted that he provided street lights in the area even before he joins mainstream politics. He emphasized on the way and manner he is respected among young people because they believe he could do more if granted the opportunity.

He said violence is not part of the APC members adding that as a party, they will stay peaceful before, during and after election will not allow anyone to intimidate them.