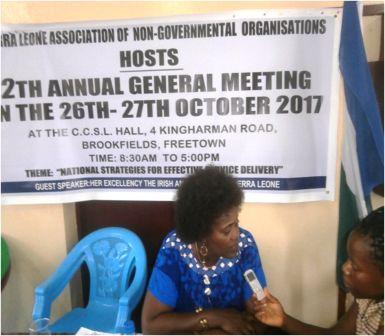 The 12th AGM meeting which attracted heads of Non- Governmental Organizations (NGO’s), religious leaders, Irish Ambassador and other international partners, Chairman and Chief Commissioner, Frederick Kamara and the media among others held at the jam-packed CCSL Hall,4  Kingharman  Road in Freetown.

Alie Konneh who speaks on behalf of the Ministry of Education Science and Technology (MEST) advanced that lot of funding coming to help poor people directly goes to NGO’s and stressed that as a ministry, they will be monitoring situation to ensure the right thing is done. “We want to ensure education is accessible and affordable to all”, He stated.

He said Marie Stopes International is a global partnership which operates in thirty seven countries and is one of the largest nongovernmental providers of family planning service in the world.  He said MSSL is a platform that can deliver for women and girls in Sierra Leone adding that the country is amazing because he said, 50% of its population below 24 years. He said teenage pregnancy still remains a big challenge in Sierra Leone and mentioned that safe abortion service is available in the country. He emphasized on the need for women to have access to safe abortion and dilated that Marie Stopes has existed in Sierra Leone for the last thirty years operating across the country.

The NGO Liaison in the Ministry of Social Welfare Gender and Children Affairs (MSWGCA), Bamin Sesay pointed out that his Ministry responsible to promote vulnerable group of people in society adding that they recognized the crucial role played by NGO in protecting children rights, gender and women empowerment.

He encouraged NGO’s to work in collaboration because he said; working in isolation could result to duplication of effort. “We required all NGO’s to sign Service Level Agreement and to register with the ministry”.

In her closing courtesies, SLANGO Coordinator expressed gratitude to the Irish Ambassador who was the guest speaker of the occasion and presented fruits and vegetables as gift to various stakeholders who have played outstanding role in the development of the organization over the years.