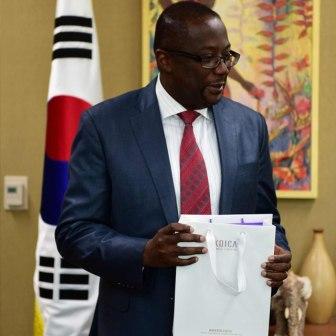 Today, I eulogize with an illustrious son of Sierra Leone who is currently Ambassador to the Republic of South Korea Sierra Leone, Ambassador Omrie Michael Golley, a Sierra Leonean lawyer, an advocate, philanthropist, a comrade per excellence, a fearless and quintessential leader.

Ambassador Omrie M. Golley, a flawless orator, a promising diplomat that has won my loyalty because of his single-minded dedication; his sacrifice; his commitment to the issues affecting Sierra Leone. Someone who believes that Sierra Leone will rise again under the leadership of His Excellency the President, Dr. Ernest Bai Koroma.

Indeed, I admire your enviable traits, you’re a beacon of hope to we the younger ones. I must say, I’m privileged to have brainstormed ideas with you in a collective vision to develop Sierra Leone.

You have made history as the First Ambassador to South Korea. Under your stewardship, that the NDN news in conjunction with Seoul city magazine awarded you the Proud Ambassador Award.

I knew you were grateful to God for that because your name has been written in the books of Korea records as this is one of South Korea’s most popular and sought after events for diplomat.

Also, under your ambit, as Ambassador: were able to secure several financial aid from the Korean Government.

In 2013, long before his appointment into the prestigious office as Ambassador, he had already mobilized the sum of $54 million for the construction of a 15th story building which will comprise of an auditorium, car parking facilities together with office and residential units.

During the Ebola outbreak, he facilitated the sum $ 500,000 for the fight against eradicating Ebola.

He also facilitated two separate cash and humanitarian donation of $ 300,000 and $ 100,000 by the South Korean government and by the Korean construction conglomerate respectively during the August 14, 2017 Mudslides and Flooding.

Through his quest in developing Sierra Leone in the Water Sector, Koica has approved the sum of $1 Million grant towards to Sierra Leone for a water rehabilitation project.

Ambassador Golley has also facilitated the Construction of the medical Centre at Tokeh.

He was instrumental in the development of progressive fishing policies between Korean Government and the Government of Sierra Leone.

At the moment, he is working assiduously on the proposed construction of second medical Centre in Koya. These and many more you’ve done.

I could go on and on to give a logical narrative of your many achievements, the truth is you’re a great achiever and, I’m proud of you.

You’ve served meritoriously and it is time for you to be rewarded. I therefore, uses this unique opportunity congratulate you and to to continue your fight to better our lots.

Over these years that I’ve known you, your integrity has never been questioned. Apparently, you are a leader of repute.

Once again congratulations for representing us in Seoul, South Korea.

I pray that God in His infinite mercy should endear you with the persevered vision and wisdom to do more.

By Bockarie Kukuku Musa, Ministry of Political and Public Affairs

The APC Selection Process For Dumm...