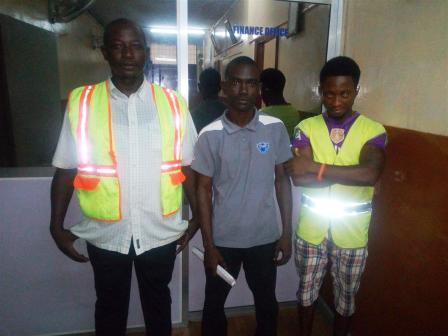 Before leaving the shores of Sierra Leone for a conference in South Africa on Wednesday, October 24, the Executive Director of the Legal Aid Board, Ms. Fatmata Claire Carlton-Hanciles said she believes there is enough evidence to bring charges against the Human Resource Manager, Umaro Deen Sesay of the engineering company, MSF Engenharia for depriving 149 workers of their salary running into two months.  (Photo: MSF workers)

The matter was referred to the Criminal Investigations Department (CID) in Freetown by the Legal Aid Board upon receiving a complaint from fifteen workers on October 10 against Mr. Deen Sesay. The workers had claimed that Mr. Deen Sesay has refused to pay their salary for two months even though there is money for that. The Legal Aid Board Lawyer, Kabba Sei Coomber was assigned to the matter to help the workers in preparing their case.

Over two weeks into the investigations, Ms. Carlton-Hanciles is calling on the CID to charge the matter.  “I would be very pleased if this matter is charged before my return from South Africa,” she said before departing the shores of Sierra Lone.

Ms. Carlton-Hanciles reached the conclusion after she was briefed on the outcome of the meeting between staff of MSF Engenharia and Lawyer Coomber of the Legal Aid Board on one hand and the Human Resource Manager of MSF Engenharia, Mr. Deen Sesay on the other at the offices of the Ministry of Labour and Social Security in Freetown on Friday, October 20. The meeting was hosted by the Minister of Labour and Social Security, Mathew Teambo.

Ms. Carlton-Hanciles took exception to the fact that the Human Resources Manager is busy offsetting debts owed by the company, when the priority should be to pay the workers’ salary. What is more, she is concerned Mr. Deen Sesay is going about this without any regard for procedures. “Deen Sesay does not seem to care whether the workers and their families go hungry for two months,” she said.

According to Lawyer Coomber who accompanied the MSF Engenharia workers to the meeting, the Human Resource Manager, Mr. Deen Sesay had been selling the assets indiscriminately and offsetting debts of the company on the alleged instruction of the employers who are out of the country. Also, he has been going about it without taking an inventory of the assets.

It was also discovered that Deen Sesay had been withdrawing money from the company’s account with ECO Bank for purposes of offsetting debts even though he is not a signatory to the company account. The said account has a balance of fifty-two million leones.

Mr. Deen Sesay was ordered to provide a comprehensive inventory of assets including those which have already been sold. In addition, he should account for all the assets sold so far in the form of receipts and other documentary evidence and total amount accrued from the sale. Mr. Deen Sesay should also explain how the proceeds were spent.

In addition, the Legal Aid Board and the Ministry of Labour and Social Security will visit the sites and premises of the company to ascertain the assets.

Meanwhile, Ms. Calton-Hanciles is also pushing for the assets of the company to be frozen. “This will be in the best interest of our clients,” she said.