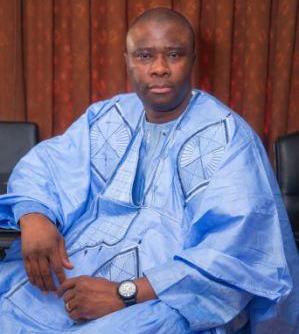 His is a story of travails and triumphs. First, his dad from Masiemra Chiefdom left his village, Rosent, to settle in Kenema to ply his trade as a carpenter. Though his father did not go to school, he was not deterred from becoming a success story. Through some lucky breaks in life, he became a famous diamond magnate and later one of the most successful Themne businessmen in Kenema. Several years later, his dad returned to serve his people as Paramount Chief. Exactly three years, three months, three weeks and three days into his reign, the Paramount Chief, Simera Thonkla IV took ill. He couldn’t recover. Traditionally, the death of a Paramount Chief in Masiemra is not announced immediately. He returns to his ancestors.

Like his dad, Alhaji Osman Bangura (in photo), also known as Thonkla (named after the Thonkla Ruling House), left Sierra Leone having sat to his ‘O’ level exams. He was born into a very large family. His dad had four wives and 26 children. Pressure was on him to take care of his younger siblings. In South-East London where he resided, Thonkla studied very hard and qualified with an LLB Hons from the University of Westminster; an MBA in Oil and Gas Management from Coventry University London Campus and later he bagged an LLM in Crime and Litigation from London South Bank University.

I was at Peacock Farm, Wellington, to visit my parents when I was informed that Thonkla was in town and was interested in being the flagbearer of the APC. I called him up and we agreed to meet the following day, Sunday. At about mid-day, I was face-to-face with a man who has a commanding height and could have easily captained a Basketball or Volleyball team. Thonkla gave me a very warm embrace and we quickly settled down to the business of the day.

Why was he running? What can he bring to the ticket? His experience, his priority areas were all questions I wanted to ask. In a very confident tone, he said the East is one of the strongholds of the opposition. He was born in Ngelehun, not too far from Kenema town itself, schooled and raised in Kenema. That was his trump card for his declaration of intent, saying: “I have the ability to cause serious problems for the opposition.” He stresses that he is a bridge-builder and he has all the tools to bring the south- east and the north-west of the country together. left – Alhaji Osman Bangura aka Thonkla being interviewed by the author

On his priority areas, the 42-year-old who believes that the young should step up in politics identified wasteful spending in government as a priority area he will declare war on if given the ticket of the party and if he becomes president. He said bloated government is holding us back as a nation and he will ensure that fiscal discipline will be the order of the day. He promises to restructure the tax system so that, “everyone will pay his or her taxes fairly.” Thonkla says he will use best practices in socioeconomic transformation such as the Rwandan model to transform Sierra Leone.

“If elected, I will ensure that 50 percent of my cabinet is women,” the Manchester United supporter, lawn tennis and basketball fan said.

Access to affordable but quality education, youth employment, enhancing the criminal justice system, health and sanitation among others are his priority areas. He wants to build a state of the art hospital, equipped with a medical school and quarters, and “strategically placed to create a healthy, prosperous country for the next generation.”

He plans to split the entire city into three boroughs: Western, Central and Eastern to create a healthy competition and also to enhance an effective tax collection system. He says he will institute a twice a month cleaning exercise and a Citizen’s Advisory Bureau to help fast-track the due process of the law.

To take away prosecuting powers from the police, Thonkla will establish the Sierra Prosecuting Service that will be charged with the responsibility to prosecute while the Sierra Leone Police pay attention to arrests and charges.

A product of the Agenda for Prosperity, the married father of three girls, dreams big. If elected, Thonkla says he will relocate Pademba Road prisons and turn the current premises into a shopping mall during his first term in office. He will do so to create employment for Sierra Leoneans and further help in boosting the economy. If this dream comes true, then the prisons, initially built in 1914 for 220 prisoners and has survived several jail-breaks, including one during the January 6, 1999 invasion of Freetown, would have changed sites for the fourth time. Previous locations include the current locations of State House and Connaught Hospital.

As a member of the Labour Party in the UK, he prides himself as a commoner. “Our spiritual leader, the late Siaka P Stevens, formed the APC to seek the advancement of ordinary people in society. Some were trade union members. They were railway workers in Lunsar.” They were commoners and thus, he belongs to a party that is for commoners, he waxes philosophical.

His major attributes? He believes he is the only commoner in the race. “I think my financial status, popularity, political connections as an outsider who has not held any public office makes me a true microcosm of a commoner.” To further burnish his commoner credentials, Alhaji, the deeply religious Muslim who hardly skips his five daily prayers, said, “I’m a commoner and I will inform the people of Sierra Leone later on the details of what I plan to do.”

Asked where his loyalty is between south-east London and Sierra Leone, he said he was not distracted. “Of course, it is 100 percent Sierra Leone but with UK influence.” On his contribution to the APC, he said he registered in 2001 and has always stood by and supported its UK chapter.

Though he has not held any political office, Thonkla, who could also inherit the Paramount Chieftaincy in Masiemra, said he is active on social media and has doggedly defended the ideals of the APC. During the Ebola outbreak in 2014 and 2015, he wrote an article, ‘One good turn deserves another,’ challenging the African Union to stand by Sierra Leone in her hour of need.

In 2008, he wrote a petition that he personally delivered to President Koroma during his visit to London. In that petition, he sought help in reducing airline and freight charges to attract tourists and citizens traveling to and from Sierra Leone.

If Alhaji Osman Thonkla Bangura gets his party’s ticket and later wins the election in March next year, he hopes to retire after his second term and return to his people in Masiemra. However, the road to achieving that may not be an easy one. The old and new guards are all clamouring to succeed Koroma. Some of them have been in politics for decades. They may not be easy to dismantle.

Alhaji comes with a breath of fresh air with no political baggage. Whether this will help the South-East Londoner, partly eastern and partly northern Sierra Leonean, the answer will come in Makeni at the APC convention not too long from now.

So what if the Best Presidential C...