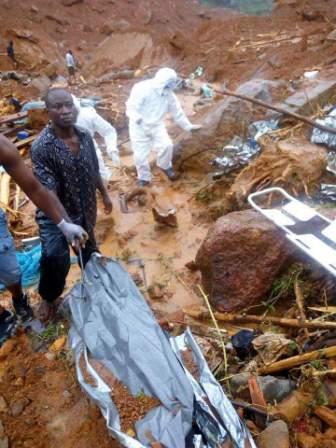 Disturbing reports coming from Freetown with horrifying images say over 300 people have perished in floods and landslides following more than just 5 hours of rain that started pouring starting about 1 a.m. local time on 14 August 2017.

The Mutemeh community situated at IMATT, back of the Guma Valley gate has been reportedly covered by a mountain of mud crushing at least 100.

At least over 200 people are believed to have died in Mutemeh alone where only 5 bodies have been reportedly recovered by rescuers so far.

Another community called Pentagon situated at Upper Regent Road, Lumley is said to have also been crushed by landslides. Casualty figures were not immediately available. In Kaningo, another community in Lumely, Western Area of Freetown, where 50 bodies were also found by youths in the community.

The Connaught hospital mortuary is said to be a scene of horror with decomposing bodies most of which are said to be beyond recognition.The Samba gutter has also reportedly flooded causing some havoc in central Freetown.

A 3-storey building has reportedly gone down in Mayiba, a community situated at Upper Kissy Books.

Sierra Leone has no contingency plan in place. It has no response plan for disasters. It has no trained personnel for emergency services. In effect, the country is bereaved of emergency rescue equipment. Emergency rescue operations volunteers use only shovels, cutlasses, pick axes and sticks in their lifesaving operations.

What were our leaders doing during the dry season when they knew the rains were preparing to come?

Poor planning and the general devastation of the forests at the mountain tops have made Freetown prone to floods.

The most horrifying images have not been published.