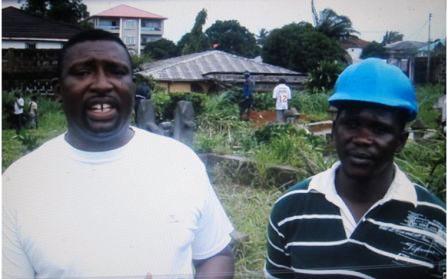 Contesting aspirant for the main opposition Sierra Leone Peoples’ Party (SLPP) Mr. James O. Smith has cleaned the Aberdeen cemetery and some streets in the Aberdeen community in order to complement government’s effort.

Mr. Smith who is aspirating for the SLPP symbol as councilor in constituency 111, ward 392 said the topmost objective of cleaning the memorial Park is due to the green-grass that has taken over the cemetery nearly one year which according to him was responsible for the removal of dead bodies in the cemetery.

“I am doing this not because I’m going into politics, but I bivalve in national development” he stressed, Mr. Smith expressed thanks and delight to the Member of Parliament for constituency 111 Hon. David Johnson for supporting him with five hundred thousand Leones (Le500, 000, 00) and one bag of rice for the cleaning.

The aspiring councilor for SLPP therefore pleaded to other communities to emulate this good example to clean burial grounds and their communities for the prevention of diseases in their communities and the country as a whole. He concludes by calling on all residents of Aberdeen to embrace the Operation Clean Freetown that government has introduced in a bid to clean the capital city.

In his statement the Member of Parliament representing constituency 111 Aberdeen Community Hon. David Jonson said even though they are not from the same party, he supported him because of national development he is undertaken in the constituency as a young man coming up in politics.

Hon. Jonson described the aspiring councilor as a nice man in the community who has embarked in community development for the past years, he also made mentioned of removal dead bodies which he said was another reason he had joined in helping him to clean the cemetery.

The Member of Parliament also disclosed that the Minister of Energy and Power will soon give him some solar lights to be installed along the cemetery road to stop the removal of corpses at night. He therefore called on community stakeholders to be mindful of their community.

As Redundant Workers fight for the...

APC Councilor and Headmen In Court...